Pagan Heart of the West: The Devil and Dame Dark 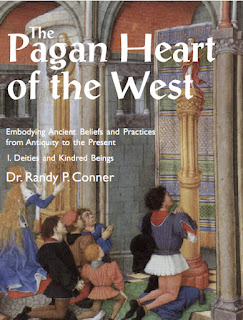 Here is a second excerpt from The Pagan Heart of the West, a new book that challenges academic notions that paganism died out in Christian times. This section is about the Devil and Dame Dark:

In nineteenth-century (and perhaps earlier) West Sussex, England, the Devil was accompanied by Dame Dark. Dame Dark appears to be related to Mother Midnight, a figure who appears in the Elizabethan comedy Wily Beguiled (or, Wylie Beguylie, 1566/7), as a pseudonym of the mad poet Christopher Smart, and as a character in Defoe’s Moll Flanders. In Wily, Mother Midnight appears in connection with Robin Goodfellow, and in Moll, according to Robert A. Erickson, she represents “omniscient power which gives life and takes it away,” “powers assigned to the Greek Fates,” a “Witch,” one who “possess[es] uncanny powers of prophecy,” one of “Satan’s ministers,” and “the old woman of the night.”

In turn, I’m reminded of an Algerian jinn called “Mother of the Night.” She takes devastates the flocks and herds of those who disrespect her but grants prosperity to those who remember her and who wear amulets sacred to her. One of this figure’s most significant hypostases is as the Welsh being called Malen (or, Malt y nos; also, Bela, Mam y Drwg, Matilda of the Night, the Old Hag, Y Wrach). Some have deemed this being an avatar of the Celtic goddess Ceridwen, while others have deemed her to be an avatar of the goddess Andraste. Over the centuries, as a result of Christianization, she apparently, as Andras, came to be called Malen and/or the “Devil’s Grandmother." The expression “chwareu yr Andras” means to “play the [female] Devil.” Malen may also have gathered into herself some of the archetypal force of the Roman goddesses Bellona and Minerva. It is possible that Malen may reflect the sinister and/or “masculine” aspect of a sort of “Double Woman” Moon Goddess whose beneficent and/or “feminine” face may be that of the goddess Arianrhod. As Malen, she is, like Llyr’s daughter Bronwen, considered a gwrvorwyn, an amazon, a “man-maid, or virago."


You can view The Pagan Heart of the West on Amazon. The author is Dr Randy P. Conner and it is published by Mandrake of Oxford.