Walking in Search of the Hidden Goddesses of London 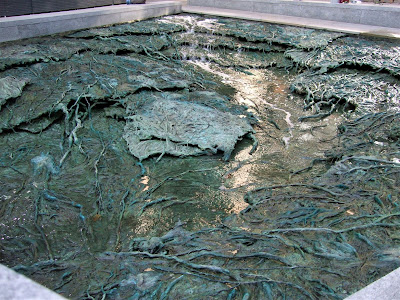 London's hidden Goddesses can still be found if you look for the signs. Take the photo above - it shows a modern work of art called Forgotten Streams, recalling London's lost River Walbrook. It is one of the sites visited on the Hidden Goddesses of London tour with Ross Norman (pictured left). Rivers were frequently associated with deities in the pagan past and offerings have been found in many of the capital's waterways.

Ross pointed out that the sculpture depicting a revealed riverbed is also near the site of an ancient well, and that wells are associated with the Goddess Brigid. I blogged about Brigid's connection with London's St Bride's church at Imbolc.

Forgotten Streams is near the London Stone and the Temple of Mithras, which are deeply connected with London's mythology - although more to do with pagan Gods than Goddesses. Ross is passionate about Goddesses. He said that one Christmas he was at his lowest ebb. His partner had left him, he had lost his job and had all sorts of other troubles in his life.

To pass the time he started reading The Secret Lore of London, co-edited by Caroline Wise and John Matthews. He was immediately inspired to go in search of London's Goddesses, whose sacred sites in the city are beautifully described in the book. The walks he now runs share that knowledge and his enthusiasm.

The walking tour starts at Temple Gate, by St Paul's, and ends at Cross Bones graveyard in Borough, just south of the river. It isn't just an informative guide to London's myths, legends and history - it is also a beautiful pilgrimage in honour and celebration of the Hidden Goddesses of London.

The next event is on March 17. It is free, but you need to book a ticket in advance and donations are welcome. You can book here: https://www.eventbrite.co.uk/e/hidden-goddess-of-london-tickets-54697044332?