Fairy Ointments & Their Uses at the MWM Conference 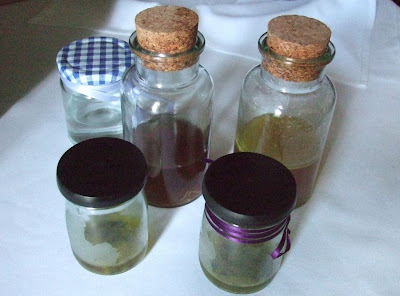 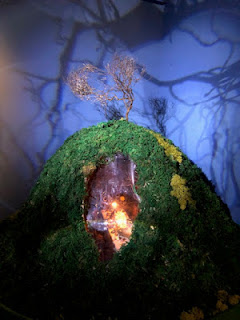 The jars and bottles in the photo above contain various stages in the creation of a fairy ointment - something you apply to your eyelids to enable you to see fairies. The potions are the work of Anna Milon and Samuel Gillis Hogan, PhD students at the University of Exeter, who gave a talk called Fairy Ointments: Medical Aid for Magical Bodies at the Museum of Witchcraft and Magic conference last weekend.

Anna and Samuel looked at  historic and folkloric records about where fairies get their magic. One common folk tale is that of the fairy midwife.

There are variations on the tale, but the basic story is that a midwife is summoned late at night by a strange man to deliver a baby. He takes her to where his wife is in labour. He then gives her an ointment and tells her that as soon as the baby is born, she is to use it to anoint the child's eyelids, but on no account should she use it on her own eyes. However, the midwife disobeys. Either accidentally or deliberately, she tries a little out on one of her eyelids. Immediately, she sees that she is in a fairy palace and the new mother is a fairy queen. Then, a few weeks later while at the market, she sees the strange man again. When she greets him and asks how the child is doing, he asks which eye she can see him in. She points to the one she anointed. The man then strikes her blind in that eye.

What that tale suggests is that fairies sometimes need physical help - in this case an ointment - in order to do their magic. Anna said there are two ideas about how magic works, which relates to both fairies and witches. One is that some individuals have special magical abilities. The other is that magic is an innate force in the cosmos, but individuals can learn to tap into that. The concept of fairies needing an ointment in order to be able to see through glamours, or see invisible things, suggests they have a superior knowledge of natural magic rather than just having special abilities. 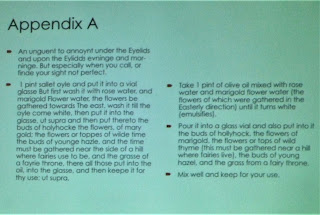 Samuel said he had looked at late medieval and early modern manuscripts, including grimoires and books belonging to cunning folk, to find recipes for magical medicines. He had found six ways of making ointments or unguents to be able to see fairies. One of these he made with Anna and brought to the conference. It requires oil, rose water, marigolds, hollyhocks, wild thyme, hazel buds and grass from a fairy throne. He admitted that no one knows what a fairy throne might be, so they collected grass from an old hilltop fort. (I've included a photo of the slide with the recipe to the left.)

People at the conference were invited to try out the finished product if they wanted, but with a disclaimer that it was at their own risk. I tried it - of course - but I don't think I've noticed any fairies since then. Maybe the grass was the wrong type.

The MWM conference ran alongside this year's exhibition, Betwixt and Between, inspired by Isobel Gowdie, the Witch of Auldearn, whose confessions to witchcraft in the 17th century included feasting beneath the Downie Hill with the King and Queen of the Fairies. The photo above right shows an artist's impression of the fairy hill, in the exhibition. You can find out more about the MWM here.