What are Your Wisest Words of Wisdom? 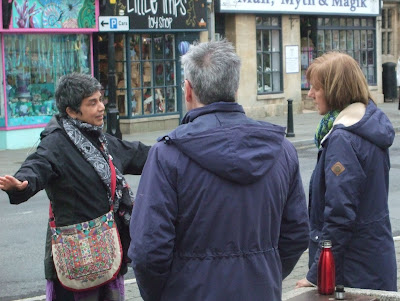 When I stopped off in Glastonbury on my way to the Museum of Witchcraft and Magic Conference, the woman with the colourful bag stopped me and asked me what I considered to be the greatest words of wisdom. She was asking everyone in the street - including the two people in blue jackets in the photo above.

She didn't argue or debate; simply thanked those who answered and offered a virtual flower in response.

You probably wouldn't get that kind of thing in many other high streets than Glastonbury's. However, I am asking that question now on my blog.

As you go to vote in the European Elections today, think: what is your greatest wisdom?

Let's all strive towards our highest ideals.

I don't know about words of wisdom, , but I hope in my case it's knowing I am often wrong , but then trying to learn from it.
Norm.

I think those are words of wisdom!