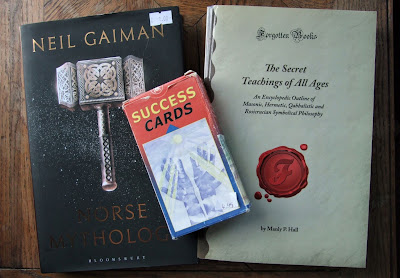 I've been very lucky at finding bargains in charity shops recently. I got a hardback copy of Neil Gaiman's Norse Mythology for a quid, a Forgotten Books edition of The Secret Teachings of All Ages, by Manly P Hall, in pristine condition for 50p and a set of Success Cards for £4.99.

Norse Mythology, by Neil Gaiman, is a book I've been intending to buy since it came out just over a year ago. Getting a hardback edition so cheaply is fantastic. The Secret Teachings of All Ages was originally self-published in 1928. It has the subtitle An Encyclopedic Outline of Masonic, Hermetic, Qabbalistic and Rosicrucian Symbolical Philosophy, and is a huge book offering an overview of numerous esoteric subjects. At the time I am writing this post, even Amazon's Kindle edition of The Secret Teachings goes for more than 50p.

I nearly didn't buy the set of Success Cards. From the title I assumed they were positive thinking cards. I have a few of that kind of thing already. However, when I looked at them I discovered that the title is a little misleading. The Success Cards are instead a set of oracle cards loosely based on the I Ching, or the Book of Changes, which I greatly respect.

The introduction points out that in our current society, success tends to mean money and power. However, in some oriental traditions, a successful person is one who 'lives in the events of life, its peaks and troughs, with a serene detachment and an imperturbable spirit'.

The cards represent forces in the world and are meant to be meditated on to understand their meanings. I've been using them since I got them and really like them.