Review: A Look at the Magickal Women Conference 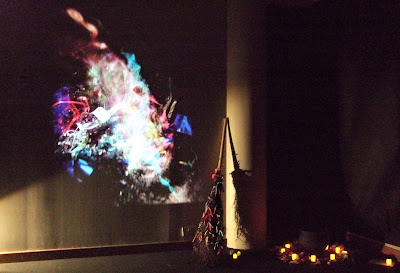 I think we are living in a golden age of magickal events. There have been so many outstanding conferences on witchcraft, the occult and esoteric so far this year, and others to look forward to. The most recent - on Saturday - was the Magickal Women Conference, in South Kensington, London. It was organised by Sue Terry, who is doing a literature PhD about women's occult fiction, and Erzebet Barthold, founder of Hadean Press.

The conference celebrated women past and present who have contributed to the history of magick and its current practices. In her introduction, Sue said she hoped each of us learnt at least three things during the day. I know I learnt more than that. 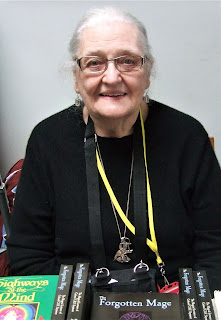 Dolores Ashcroft-Nowicki (pictured right) gave an inspiring headline speech. She said: 'We are good at surviving.' She spoke about how she, personally, had survived as a refugee in the Second World War and spent eight hours in a boat at sea escaping the Nazis. She also spoke about how magick and paganism have survived in the world, despite the efforts of Christianity and the Enlightenment to get rid of them.

We, as magickal women, are not only surviving, but thriving. Dolores said that only a few decades ago, a conference like this would not have happened.

There were eight rooms holding talks, masterclasses, storytelling, and art installations throughout the day - so it was impossible to go to everything. I mainly focused on occult art and literature.

The picture at the top shows an art installation by Sara Hannant, which I found moving and inspiring. The dimly lit room held a cauldron of water from Sancreed well, in Cornwall, a besom from the Museum of Witchcraft and Magic, and a slideshow of Sara's photographs from her Numinous exhibition with a soundtrack of running water. Sara is part of a group that clears clouties (ribbons) left by visitors at sacred sites, then transforms them using the power of the elements to make art as well as recycle litter.

Going back to the idea of learning new things, the first thing I learnt at the conference was in Dr Lila Moore's talk about Maya Deren. Maya was a pioneer of women's cinema, but was also a voudoun priestess. Her film At Land was an act of ritual magick about self and identity, instilled with the feminine. It was originally silent, but the link I found on YouTube and have shared below has music. I had never heard of Maya Deren before, but I will now make a point of learning more about her.

Liz Williams talked about Jane Ellen Harrison, who was an early feminist, an author and one of the Cambridge Ritualists. She is also worth reading more about.

Madeleine LeDespencer then spoke about Berthe de Courrière, who was a famous Satanic woman of fin de siècle Paris. She inspired many artists, writers and poets, including Charles Baudelaire for Les Fleurs du Mal (The Flower of Evil). Although I have read Les Fleurs du Mal in translation and had heard about Berthe de Courrière, in Madeliene's talk I learnt that Berthe has, in the past, been maligned and is worthy of further research.

After lunch - held on the venue's sunny roof terrace - Christina Oakley-Harrington was the keynote speaker. She talked on Magickal Women, Power and Property; about how women have been particularly influential in modern witchcraft because much of it has taken place in their homes. People might laugh about rituals in suburban living rooms, but it has allowed the privacy and freedom for witchcraft to thrive and that has largely been due to the efforts of women. 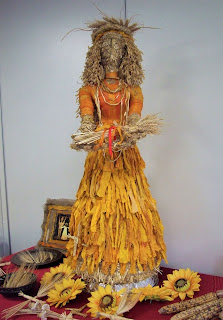 I then went to Charlotte Rodgers's talk about the Dancing Serpents of Art and Magick. Charlotte is an artist who creates amazing sculptures from found objects including broken glass and the bones and feathers of dead animals, including roadkill. She perceives her work as having a shamanic aspect and views some of her pieces as spirit houses.

Julia Phillips talked about Madeline Montalban, the Magus of St Giles. Madeline's career started in journalism, but she was also a highly influential Magickian. She founded The Order of the Morning Star, ran a correspondence course in angelic magic and wrote on tarot and astrology for Prediction magazine from 1953. I learnt a lot in Julia's talk and am looking forward to reading the book she is currently writing on Madeline Montalban.

Scarlett Amaris gave a slide show of Una Woodruff’s artwork from Witches by Colin Wilson and read Una's own words about her inspiration for her pictures. I hadn't known about Una before and am glad to have learnt about her.

Artist in residence Victoria Musson offered a workshop on the Corn Mother in Ancient Civilisations to the Present: Offerings and Sacrifices. I didn't manage to attend the workshop, but I did go to her art display of a wonderful corn Goddess and offerings (pictured above left).

I hope the Magickal Women Conference runs again next year, as it was truly inspiring. You can find out more here: https://www.magickalwomenconference.com/
Posted by Badwitch at 08:00