As well as being a blogging witch, I've always enjoyed playing board games. So, I was fascinated to see quite a few games at Smoke and Mirrors: The Psychology of Magic, an exhibition currently on at the Wellcome Collection, in London.

I also remember that back in the 1970s there was quite a fashion for board and card games with themes relating to psychic and magical powers - some more serious than others. Information on the wall at Smoke and Mirrors said:


Extra Sensory Perception (ESP) and TelepathyThe idea that we have hidden psychic powers is currently rejected by mainstream science but continues to inspire the performances of our most successful magicians. Extra Sensory Perception (ESP) was a term used by psychologist JB Rhine in the 1930s to describe psychic abilities like telepathy and clairvoyance. The 1960s and 70s saw a resurgence of interest in ESP with the US military even exploring its potential for warfare. Research tool that were originally designed for testing ESP in the laboratory - such as Telepetha Cards - became popular with the general public, and board games offering to reveal hidden ESP powers sold in the millions.

The picture at the top shows Kreskin's ESP game and the one to the right shows a set of Telepetha Cards. I've never played either of those games - though I'd be interested in trying them. My dad did own a set of Zener cards, which I still have. These were originally created by Karl Zener, a colleague of JB Rhine, and they used them in ESP experiments.

Zener cards have symbols on them. One person picks a card at random, and another person tries to psychically see what the symbol is without looking at the card. Telepetha cards look a bit similar. Kreskin's ESP game uses a pendulum to supposedly test whether you have ESP. 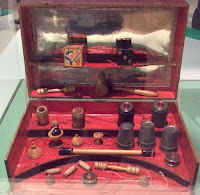 Smoke and Mirrors also had a display showing various sets of magic illusions people could buy as toys or for home entertainment from the mid 19th century up to the present day. The picture to the left shows an old one.

I earlier blogged about a homemade ouija board at the Wellcome Collection, on loan from the Museum of Witchcraft and Magic. Ouija boards were also originally designed for home entertainment purposes and were even sold as toys. It is only relatively recently that some people have started to consider them as being particularly dangerous occult tools.

Smoke and Mirrors is on the theme of what conjuring tells us about the human mind. It is about psychology and deception, so generally offers a sceptical view of things like seances as well as showing how stage illusions can fool us. The Wellcome Collection is at 183 Euston Road, London NW1 2BE. Entry to the collection and to the Smoke and Mirrors exhibition is free, just turn up during open times before 15 September.