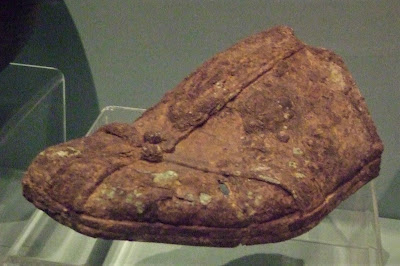 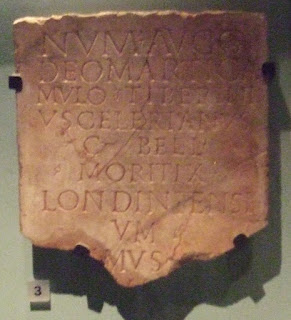 In Roman times, Mars was a god of London.

The marble plaque in the picture to the right was once near the banks of the Thames. It bears a Latin inscription that translates as: 'To the divinities of the Emperors (and) to the god Mars Camulos, Tiberinius Celerianus, a citizen of the Bellovaci, moritix, of Londoners the first...'

The plaque is currently on show at the Secret Rivers exhibition at the Museum of London, Docklands. The description of it says it dates from about AD 160 and was at a temple dedicated to Mars Camulos, a Romano-celtic God. The person who founded it, Tiberinius, was a sea-trader. It was discovered close to the Thames and suggests Mars Camulos might have been considered a guardian of the river in Roman times.

Another find from the area is the foot of a statue that possibly represented Mars Camulos - although it is hard to be sure from just a foot. That is also on display, and you can can see it in the photo at the top.

Archaeologists have discovered the remains of a huge temple complex from the Roman era, near modern-day Tabard Square, in Southwark. Some of the finds from digs there are at the exhibition, along with other signs that the Thames, and its tributary river the Walbrook, have long been considered sacred waterways.

I recently visited the Secret Rivers exhibition, which is about the secrets of London's historic waterways, and I'll be blogging more about it at a later date. It runs until October and is on at the Museum of London Docklands, No.1 Warehouse, West India Quay, London E14 4AL. Entry is free and you can find out more here:  https://www.museumoflondon.org.uk/museum-london-docklands