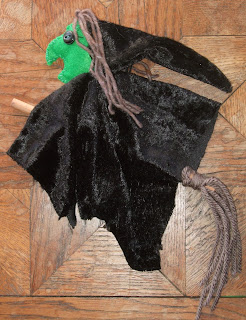 Here is an extract from my book Pagan Portals - Poppets and Magical Dolls on the history of kitchen witches and how to make one to protect your home:

Kitchen witches
A kitchen witch – as well as being a real-life witch who brews up magic in the heart of her home – is the name given to a doll that looks like an old crone flying on a broomstick.

These magical charms, or poppets, are supposed to ward off evil. The tradition comes from northern Europe, although one hint that they may have at one time been an English folk custom appears in the will of a John Crudgington, of Newton, Worfield, Shropshire, dated 1599. In it, he included among his household possessions ‘one witche in the kytchyn’.

This one is relatively simple to make.

Make the head of the witch by cutting two circles of green felt, 5cm in diameter. Trim both circles into a witchy face in profile, with a hooked nose and upwardly pointing chin to one side. Overstitch around most of the face, leaving a gap at the neck. Fill the head with stuffing and then complete the outer stitching.

To make a witch’s cloak, cut a 20cm square of black stretchy velvet, then cut a very small hole in the middle of the square. Thread the pipe-cleaner ends through the hole and stitch the fabric to the bottom of the head around where the pipe-cleaner is attached.

To make a witch’s hat, cut a triangle of black stretchy velvet, with each side 10cm. With right side facing, stitch two sides of the triangle, then turn it so the right side of the fabric is on the outside and the seam on the inside. Stitch the open edge of the hat around the witch’s face.

To make the broom, take the hazel or ash stick (or dowel) and tie the birch twiglets (or more strands of wool) to the bottom. Wrap both ends of the pipe-cleaner several times around the broom’s middle so the cloak hangs down far enough to hide all the pipe-cleaner.

Hang your witch up by the kitchen door or back door to your home.