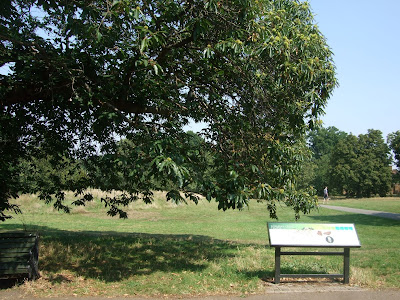 One of the best known tales of London Lore is that St Paul's Cathedral was supposedly built on top of an ancient temple to the goddess Diana. Although there is no archaeological evidence to back that up, many people like to believe the site - on the the highest point in the City of London - is sacred to the virgin huntress who cares for women, children and wild places. 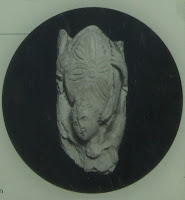 Whatever the truth of that might be, Diana is still a London goddess. Archaeologists have excavated the remains of a Romano-Celtic temple in Greenwich Park that is associated with her. In a 1902 dig, one of the finds was part of a statue thought to represent Diana. An ivory figurine of a woman holding up a shield was also found (see picture right). That is now thought to represent Victory, but I keep seeing the modern Wonder Woman, who is also called Diana, in it.

Later excavations found tiles with inscriptions to the god Jupiter and to the spirits of Roman emperors, so it wasn't exclusively a temple to Diana. Nevertheless, it does seem likely that she was honoured there.

There isn't much left to indicate where the Greenwich temple was except a board with details of the digs and discoveries. You can see it in the photo at the top. However, when I was in the park earlier this week, I noticed the hot summer had scorched the grass browner in outlines that might show the location of old walls below the ground. I do recommend popping along and having a look before the grass gets green again.

Another Royal Park - Hyde Park - has a statue of Diana, called The Huntress Fountain, in the Rose Garden. It dates from 1906 and was made by Countess Feodora Gleichen, who was the first woman member of the Royal Society of British Sculptors.

This year, one of my resolutions was to blog about London's gods and goddesses. Below are links to several of my earlier posts, and some other links: