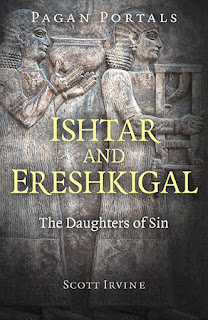 Here is a bit of a treat - a sneak preview of a book that won't be available to buy until spring 2020. Ishtar and Ereshkigal – Daughters of Sin,by Scott Irvine, is a modern understanding of very ancient powers. The sisters are the primordial feminine force born from the demise of the old Stone Age mother goddess almost 5,000 years ago into a patriarchal world of Gods, kings and priests who influenced the people of Mesopotamia into a civilised way of thinking and living. This is a short excerpt:

Resting in Nature
To find any sort of balance in an ever changing world, a journey needs to be taken, not only in the physical plane but also the spiritual realm. Our existence relies on opposing forces interacting with each other, a duality of a single energy, creating change that allows matter and life to evolve in space and time. It is a power struggle between two forces, a dynamic we witness with day and night, summer and winter and life and death. From the interaction of the duality a third force is created from the first two, born as a separate energy, a new existence in the world of the four elements.

Ishtar and Ereshkigal were given life through the destruction of the Mother Goddess Tiamat, a boundless mass of ocean water that contains all the ingredients of life. Ishtar represents the infinite heaven. Her energy has the ability to heal and comfort those in need. Ereshkigal represents the finite and constricting underworld of the dead whose energy can bring death quickly to those suffering in life.

The sister’s work together in order to maintain the balance of life and death, of light and dark and of pleasure and suffering felt in the human mind. Between them they bring self awareness and ambition into the material realm, it is their interaction with each other, the dance of the two forces that makes every mind unique to each person. They generate the change in the physical reality creating space and time in which the human mind can interact in the realm of matter with what we believe to be free will. How they work together affects how things change in time, manifesting events through the attraction and repulsion of their force, invisible powers that play out in the physical world.

Ishtar and Ereshkigal is due for release in March 2020 but can already be viewed on Amazon. It is published by Moon Books.