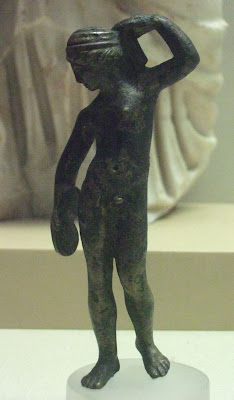 Today is Intersex Awareness Day, and I am sharing the details of two deities with intersex features that you can see portrayed in London.

The small statuette of Hermaphrodite (pictured right), the mythical being combining both male and female characteristics, is on display in the British Museum. The metal effigy dates back to Roman times and was probably kept by an individual because it had a personal meaning for them.

However, as the statuette was found in the river, it might have been given as an offering. Many similar items have been discovered in London and I mentioned a few in an earlier post about the Little Gods and Goddesses of London.

In the V&A museum, you can see a red sandstone carving of Shiva Ardhanarishvara, who is the androgynous form of the Hindu deity Shiva, depicted as 'the Lord who is half-woman'.

Intersex Awareness Day falls on October 26 to commemorate the first intersex protest in North America in 1996. It is an international day of grass-roots action to end shame, secrecy, and unwanted genital cosmetic surgeries. You can find out more here: https://intersexday.org/en/

One of my resolutions this year was to blog about gods and goddesses of London, and today seems a good one to point out places in London that you can view deities who do not clearly fall into either category, or could fall into both. It is a reminder that perhaps it is inaccurate to try to define deities as either gods or goddesses, perhaps a more neutral term would - at least sometimes - be better.