In his book, Cursed Britain: A History of Witchcraft and Black Magic in Modern Times, Thomas Waters looks at the evidence that cursing – the belief in it and fear of it – has been alive and well from the 19th century and is still with us in the 21st century, despite many academic claims that it had died away due to better education and scientific thinking.

Thomas Waters writes that people who are experiencing misfortune have, since historic times, sometimes come to believe they were cursed. His book looks at witchcraft from the 1800s to now. Over that time the way we live has, of course, changed considerably from being largely rural, to being technology-driven and largely city-based. In the 1800s, those suspected of witchcraft were often persecuted in villages, even if campaigners against superstition said it was nonsense. Thomas Waters writes that increasingly effective policing made alleged witches generally safer.

Belief in mystical powers grew in the Victorian era, with fortune tellers and cunning folk making a living, sometimes fraudulently, but sometimes helpfully, in an age before the NHS and proper counselling services. Witchcraft beliefs declined in the first half of the twentieth century, with the advent of better health care, but there was a big revival from the 1970s onwards. Although many magical and faith practitioners provided curse removal services, the problem of financial frauds also became more common.

Studying the Victims
Waters writes that investigating black magic is difficult, because witchcraft is secretive, and people don’t like to write about their fears of being cursed. One should also remember the other side of that, such as the baseless Satanic Panic of the 1980s and 1990 in which people were wrongly accused of ritual abuse, due to other people’s fearful fantasies. Yet Waters writes that the most important figures in his topic are the victims – those who believe they have been cursed, whether they have actually been or not. The clients of cunning folk had to believe that the witch bottle or other remedy would work. Witchcraft is about belief, not calculation. 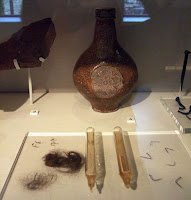 Protection against Witchcraft
Usually people come to believe they are cursed after experiencing a series of misfortunes, rather than a single one, and after having tried mundane remedies. In the 19th century, if a specific person was suspected, then the most common first approach was to ask the witch to revoke their spell or to bless the afflicted person. If that didn’t work, then scratching the witch – drawing blood, particularly on the head – was often tried. Sometimes this could be a violent assault.

Protection against witchcraft included putting a horseshoe, or rowan or alder branch, above the door; witch marks carved in buildings, certain items such as knives, open scissors or shoes left in the attic, or witch bottles placed up the chimney. (The picture to the left shows a witch bottle found in London.)

To protect yourself when out and about, in Scotland special brooches, know as ‘luckenbooth brooches’ were produced. These were often shaped like a heart with a pin through the middle. Cunningfolk proliferated, although technically illegal, and offered remedies including animal hearts stuck with pins, herbs to burn, Bible verses written on paper, and words to utter. The frequently charged high prices.

Poppets and Dolls used for Cursing
Waters then looks at how witches did magic, and says that “torturing figurines representing their victims” was common and that “attacking effigies…is probably the oldest, most widespread and most enduring type of magic.” (The picture to the right shows curse dolls from the MWM exhibition Poppets, Pins and Power.)

He points out that people accused of witchcraft in the 19th century in England didn’t often actually do this, but other people did – sometimes to get their own back at supposed witches. Sometimes the effigies were burnt or melted or left to rot. Sometimes they were hanged – as was the effigy of a fortune teller in London’s Moorgate in 1821. It was dressed as a witch and hung in a window.

You can view Cursed Britain: A History of Witchcraft and Black Magic in Modern Times on Amazon.

You can read my write-up of Thomas Waters' talk at London Fortean Society here: http://www.badwitch.co.uk/2019/09/thomas-waters-on-cursed-britain.html