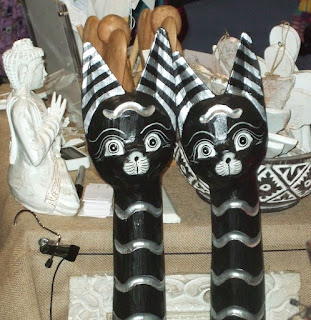 These cute cat statues were on a stall at the Mind Body Soul Experience at Alexandra Palace, which I went to yesterday. If I wasn't skint at the moment, I would have bought them, but instead I took the photo to the right. (And I will admit that getting a press pass for Friday so that I could review the event meant it was a particularly great day out for a cash-strapped blogger.)

The event has lots of stalls selling tempting things - with quite a few bargains to be had as well as some nice freebies being given away. I did buy a packet of curry paste after trying a delicious sample on one of the stalls.

The event has several areas offering free talks, demonstrations and classes. You can just drop in to any that take your fancy, which is really nice.
It gives you the chance to experience a lot of different things, including meditations, vegan cookery, bellydancing and various spiritual practices.

I thought I'd like to try something new so the first thing I sat in on was a demonstration of spirit art. Medium Irene Gloux attempted to contact people's ancestors and combined that with drawing charcoal sketches of the spirits she saw.

It was very interesting as I'd not seen that particular technique used before. She explained it was similar to automatic writing. To the left there's a picture of the first picture Irene drew. She said that she got the name Albert and that the man had lived in a boat at sea for a while. No one in the audience immediately said they recognised him, but one woman eventually agreed that it might relate to her as she travels a lot and was planning a long trip abroad.

I suspect that, like any psychic technique, it isn't easy to perform spirit art in a short period of time in a crowded exhibition hall. I'd quite like to try this myself, in my witchy room, having properly cast a circle and prepared the space to invite ancestors across at Samhain.

Later I went to an archangel activation workshop run by Flavia Kate Peters (pictured right). Flavia is a fellow Moon Books author, but now writes for Hay House. She is a very prolific writer and also presents lovely workshops. I don't do a great deal of work with angels normally, except Cabbalistic pathworkings. Flavia used guided meditation techniques along with sound and scents to help everyone visualise an encounter with their guardian angel and then the archangels Micheal, Raphael and Gabriel.

After the workshop I chatted to Flavia and her partner Barbara Meiklejohn-Free at their stall. They sell lovely Indian silk skirts and yoga pants, and again I struggled to stop myself buying something.

The Mind Body Soul Experience is on all this weekend until 20 October at Alexandra Palace (the foyer and show entry area is pictured below), London, N22 7AY. It runs alongside the OM Yoga Show and tickets for one event allow free entry to the other, which is nice. Online admission is adults £12, concessions £10. On the door, adults pay £15, concessions pay £12. You can find out more here: https://london.mbsevents.co.uk/ 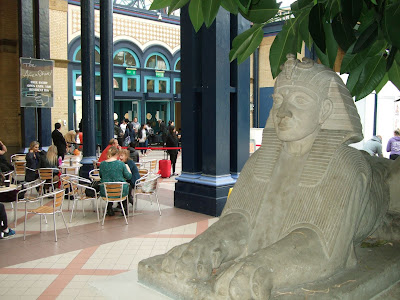