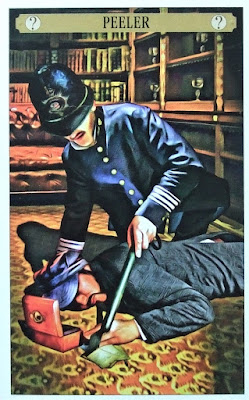 How do you feel about work? Does it sometimes feel a real slog to get even routine tasks done, but you know that only persistence will bring success? That's what the Knight of Pentacles is about. In the Sherlock Holmes Tarot, the Knight of Pentacles is represented as the Peeler, or the police constable, who catches the thief through determination and physical stamina.

He might not have the brilliant mind of the master detective, but he gets the job done and is a reliable person to have as your ally. However, if you are on the wrong side of him - as Sherlock himself sometimes is - then he will cause you trouble.

This was the card I drew today. In the Sherlock Holmes Tarot, the suit of Pentacles is called Deduction. The suit emphasises the importance of observing the world around you and looking for even the tiniest clues in the form of physical evidence that will help you solve life's problems and mysteries. The Peeler card suggests that, once you have seen the clues, you need to be methodical and sometimes patient in deducing what they mean. Don't jump to hasty conclusions, but also don't be lazy - which is the reverse meaning of the card.

Interestingly, exactly a month ago I drew a tarot card for the day and it was the King and Queen of Pentacles from the Wicca Moon Tarot. So, we are still in the season of winter and connected to the element of earth, which the suit of Pentacles relates to, but we are perhaps having to work just that little bit harder than a month ago. Take pride in what you do, keep a steady course, and you will succeed. Someone trustworthy could also help you if you ask them.

You can view the Sherlock Holmes Tarot on Amazon and read my review of the deck here.