Tarot for the Day: Victorian Steampunk Eight of Beetles 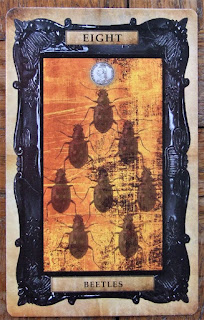 I drew a card for the day - the Eight of Beetles from the Victorian Steampunk Tarot.

While I like the images on the Victorian Steampunk Tarot, it is one of those decks in which the Minor Arcana cards are half way between plain pips and fully pictorial. The cards suggest a meaning in a stylised form - in this case there are beetles in a neat, arrow-head formation, just reaching a coin. Yes, it can mean you are about to get some money. It won't be a huge windfall, but it will be some sort of financial reward, probably as a result of patient hard work.

Like the Eight of Pentacles - or Coins - from the Rider-Waite-Smith deck, it is a card about work. It generally relates to learning a trade or doing an apprenticeship. It points out that your perseverance will eventually pay off. The book that comes with the Victorian Steampunk Tarot explains that the card can also be about education leading to a fulfilling career.

That feels relevant to me at the moment. I've come to the end of a month in which I had several deadlines for essays and other pieces of assessed work on my MA course. I did have to put in extremely long hours and sometimes I struggled to keep going. Although I can take things a little bit easier for a while, I now have to start working on my dissertation - the longest and most difficult part of an MA. But this card tells me it will be worth it in the end.

I know I am not alone - this time of year is when most people who are in education have exams or other forms of assessment. This card is a message that persistence will pay off. Work hard, and you will do your best. The goal is in sight.

The reason I used this deck for my Tarot for the Day is that one of my resolutions this year was to use divination sets from my collection that I haven't got out for a while. Last week, I used the Wildwood Tarot. Earlier this year I used the Fairy Tale Tarot and the Lover's Path Tarot.

You can view the Victorian Steampunk Tarot on Amazon.

Good luck with everything.
Norm.