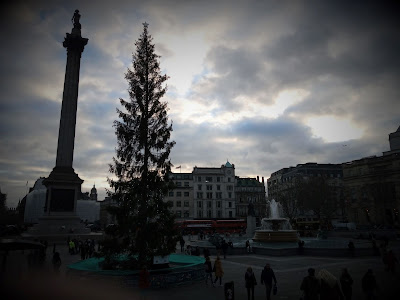 This is a photograph I took of the Christmas tree in Trafalgar Square. It is adorned with 500 lights, which is a traditional decoration in Scandanavian countries. The Trafalgar Square Christmas tree is donated to the people of Britain by the city of Oslo, in Norway. This annual tradition began in 1947 to commemorate British support for Norway during the Second World War.

Every year, the tree is a focus for carol-singing to raise money for charities. It is put up in early December and stays there until just before the Twelfth Night. After the tree is taken down, it is composted. The tree in Trafalgar Square is usually a Norway spruce. The only pine tree that is native to the UK is the Scot's pine. As you might expect, that is found more in Scotland than in London. One of the Great Trees of London is a giant fir in St Paul's churchyard, which is native to North America.

Although nowadays pine trees are very much associated with Christmas, the custom was only popularised in England by Queen Victoria and Prince Albert. Before Victorian times people brought boughs of evergreens into their home at Yuletide in this country, but not entire trees.

Pine is one of the trees of the ogham - an ancient Irish alphabet that can be used for divination. In the ogham, pine represents rising above adversity, perhaps through a heightened state of consciousness gained through pain or suffering. If you climb to the top of a tall pine tree, you will certainly get a clear view of what lies ahead, and that is also a meaning of this tree. Through gaining insight and knowledge of the path ahead, the pine can also be a tree of new beginnings, as it shows us the way to go forwards. If you have a real Christmas tree this year and want to start collecting your own ogham sticks, you could save a piece of the wood, dry it, then carve the ogham symbol for fir into it.

If you want to send me a photo for a Pagan Eye post, please email it to badwitch1234@gmail.com. Let me know what the photo shows and whether you want your name mentioned or not. For copyright reasons, the photo must be one you have taken yourself and you must confirm that you are submitting it for A Bad Witch's Blog.