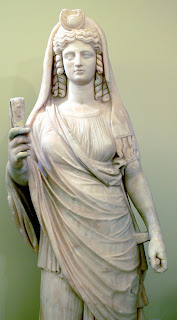 Pagan tutor Kenneth Rees is running a course on Underworld Journeys: Myth, Psyche and Initiation, in central London in January 2020.

Here is the information about the course:


A theme which has captured the classical, romantic and popular imaginations for thousands of years has been the descent of the hero or heroine to the Underworld and their triumphant return as fuller, richer beings. Modes of interpreting this journey have been many and the vehicles used to articulate it equally numerous including those of art, drama, dance and song.

The course will look as the role of Sumerian myth in expressing the descent and return of Inanna, supported by the more well known voyages of Demeter and Persephone plus Orpheus and Eurydice from the classical Greek tradition. The Welsh myth of Pwyll will also be referred to.

The value of this particular mythic theme will be directed towards an examination of the problem of personal identity and the quest for the `self' in our early 21st century society.
Parallels are also drawn with the psyche's passage to the depths of the unconscious. Students are encouraged to use insights gained from these stories to make links with their own lives. A light experiential component may also be included.

Recommended reading for the course includes:
Inanna: Queen of Heaven and Earth by D. Wolkstein and S.N.Kramer
Descent to the Goddess by S.B. Perera
Introduction to a Science of Mythology by C.G. Jung and C. Kerenyi
The Hymns of Orpheus; mutations by R.C. Hogart
Plus viewing of Jean Cocteau's film `Orphee' 1950

The picture at the top shows a statue of Isis-Persephone at the Archaeological Museum in Herakleion. Photographer: Wolfgang Sauber