London in December: The Waste Land and the Grail 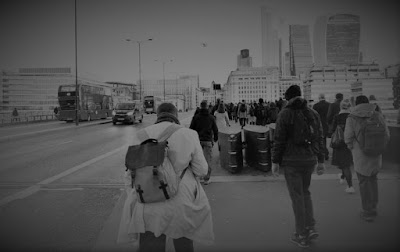 Here is a photo of people walking to work on a December morning this week. Back in December 1922, T S Eliot described people walking over London Bridge in The Waste Land, which is probably the most influential poem about London in the past century. He described it as an “Unreal City”, in which each person flowing over the bridge fixed their eyes on their feet, thinking only of their own woes:


Unreal City,
Under the brown fog of a winter dawn,
A crowd flowed over London Bridge, so many,
I had not thought death had undone so many.
Sighs, short and infrequent, were exhaled,
And each man fixed his eyes before his feet.
Flowed up the hill and down King William Street,
To where Saint Mary Woolnoth kept the hours
With a dead sound on the final stroke of nine.

Things haven't changed much have they? There are still people dying needlessly; impoverished, sick or homeless. Maybe things have got worse. Those barriers at the start of the bridge, erected to try to prevent terror attacks, weren't there in Eliot's time. How did people come to hate each other so much that such things are necessary?

Most of us are not quite like that though, are we? But maybe we walk on, staring at our feet, and trying not to look at the suffering around us, because we don't know quite what we can do about it, and all the time feeling a little more dead inside each day.

The Waste Land is a poem showing fragments of life (and death): scenes depicting people of various classes and ethnicities, yet disconnected from each other. The title refers to the Waste Land of the Grail legends. It shows a land that needs healing, but that only something miraculous - like the Grail - will fully mend the rifts between us. 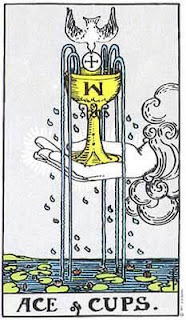 But what is the Grail? Well, opinions differ. In popular beliefs it is the cup of the last supper, the vessel used to collect Christ's blood at his crucifixion, or even the secret bloodline of Christ. Some say that the Grail represents the Holy Spirit or the Divine Feminine (some also say those are in fact the same thing). In one legend, it was carved from a crystal that fell from Heaven, and broke in two. One half formed the Emerald Tablet of Hermes Trismegistus, while the other became the Grail. To many pagans, it is the cauldron of the Celtic goddess Ceridwen which offers rebirth and renewal. In tales of the Fisher King, it is one of the Hallows, along with a spear, a sword and a plate or dish. These relate to the elements in magic and the suits in tarot. The cup represents water and feelings, especially love, and is exemplified in the Ace of Cups card.

The Grail has also, supposedly, the ability to take many different forms - both real and visionary. According to legends, only one who is pure of heart can hold the Grail, but all who are offered it are asked the question: "Who does the Grail serve?"

The generally accepted answer is that it serves us all. Not any person or group of people above any other. We all need healing by the force of universal love before renewal is possible.

I believe that the message of the quest for the Grail is hope: hope that someone pure of heart can save us from the Waste Land with a message of love for all. At the moment, all we can have is hope, but hope is a start on the journey.