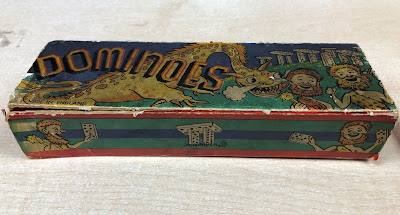 Just look at this box of dominoes with one of the most bizarre pictures I have ever seen on a game.

There’s a pair of Neolithic blokes dressed up the kind of “cave man” outfit I remember from The Flintstones, building Stonehenge out of giant domino tiles accompanied by a big smoking lizard. I’m not sure if that’s Puff the Magic Dragon or some sort of weird interpretation of a dinosaur.

For some reason the men are carrying spiky clubs, although I’m pretty sure you wouldn’t have needed spiky clubs to build a megalithic monument, even if they had been easy to knap out of flint or carve from antlers back then. I can’t see you need them to play dominoes either.

I didn’t buy the set because I counted the tiles and there were two missing, although I’m kind of wishing I had. I have seen a set like it once before - in an exhibition of vintage memorabilia at the Stonehenge visitor centre. I'm guessing it is relatively rare.

I agree it must be rare , I have never seen it before.
Norm.