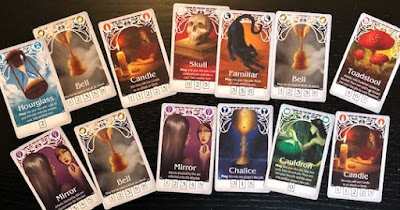 I've got a bit of a collection of witch-themed board and card games. Here's my review of a new one I picked up recently. It is called Witching Hour and is a short card game for 2-5 players.

The idea is that you are students at a school for witches and are conducting a magical contest to see who can brew the best potions and cast the most effective hexes. This is represented by duelling with sets of cards representing spell components such as bells, toadstools and candles.

You get dealt a hand of 13 cards and make up sets of the same type to attack another player. They can try to defend with equal-numbered sets, but if they can't they take the attack cards into their hex pile. At the end of the round, the values of the sets in each hex pile are counted and the lowest score wins. 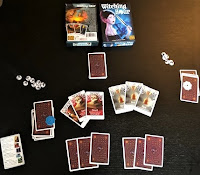 The cards all have other abilities too. For example, mirrors reflect attacks, books let you peak at another player's hand and take a card, you can play a familiar into your own hex pile to block an attack.

I love Witching Hour's theme and the artwork on the cards. It is a quick, fun game too - perfect for playing at a Halloween get-together.

You can view Witching Hour on Amazon - and you can follow the links below to read about some other witch-themed games I've blogged about in the past: