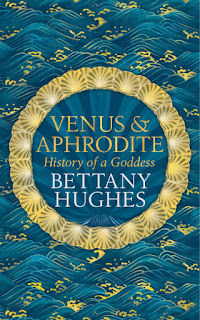 If you are looking for the perfect gift for a book-loving Valentine, this is what to get them.

Venus and Aphrodite: History of a Goddess by Bettany Hughes is a beautifully written history of the goddess of love, from her ancient origins to the present day. Bettany Hughes is famous as a documentary presenter and author specialising in the history of goddesses and powerful women. In her latest book she counters the popular view of Venus as "Safe, attractive, chocolate-box-pretty". She shows how this deity is "the incarnation of fear as well as love, pain as well as pleasure".

The goddess who the Greeks called Aphrodite and the Romans called Venus could don armour and weapons in battle, and certainly did not think that making love was the opposite of making war.


Through ancient art, evocative myth, exciting archaeological revelations and philosophical explorations Bettany Hughes shows why this immortal goddess endures through to the twenty-first century, and what her journey through time reveals about what matters to us as humans.

Charting Venus’s origins in powerful ancient deities, Bettany demonstrates that Venus is far more complex than first meets the eye. Beginning in Cyprus, the goddess’s mythical birthplace, Bettany decodes Venus’s relationship to the Greek goddess Aphrodite, and, in turn, Aphrodite’s mixed-up origins both as a Cypriot spirit of fertility and procreation – but also, as a descendant of the prehistoric war goddesses of the Near and Middle East, Ishtar, Inanna and Astarte. On a voyage of discovery to reveal the truth behind Venus, Hughes reveals how this mythological figure is so much more than nudity, romance and sex. It is the both the remarkable story of one of antiquity’s most potent forces, and the story of human desire – how it transforms who we are and how we behave.

I heard Bettany Hughes give a lecture about Helen of Troy and Aphrodite at the British Museum, after going to view the current exhibition there on Troy. This  delightfully written book covers what she said about Aphrodite, but goes into more depth about the many aspects of this empowering goddess.

You can view Venus and Aphrodite on Amazon.