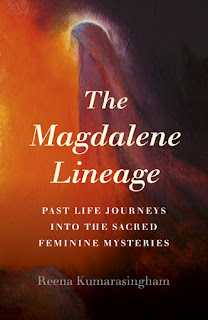 As Easter is coming up next weekend, this is a post looking at the sacred feminine within Christian traditions. For two thousand years, Mary Magdalene has been an enigmatic figure. She was shrouded in mystery, a feminine caricature of either the purest of saints or the most repentant of sinners. Here is an excerpt from The Magdalene Lineage by Reena Kumarasingham, which was published at the end of March:


For many centuries, patriarchy has dominated the mass consciousness. The unfortunate consequence of this has been the suppression of the feminine. Religion and, to a certain extent, spirituality were not immune to this. Even God is referred to as a “He” instead of a genderless being. It cannot be denied that the feminine representation has either been maligned or marginalized within many of the mainstream religious and spiritual philosophies and practices.

None can illustrate this better than Mary Magdalene.

Mary Magdalene – her name conjures up an enigmatic, mysterious figure from more than two thousand years ago. She is either a muse – inspiring tales and teachings, which fill our imagination with mysticism and feminine perfection – or a forgotten afterthought – a minor worshipping follower of Jesus, buried in the annals of time.

Who was Mary Magdalene? Was she an ethereal, pure-hearted, ideal feminine heroine who captured the heart and sensibilities of Jesus, one of the most charismatic, inspiring figures of our time? Or was she a prostitute, who had besmirched her personal reputation and that of all women, offered salvation by the Son of God? Was she a sinner or a saint?

These questions do not only impact the perceptions of Mary Magdalene. They also impact the feminine in spirituality as a whole.

Five years ago, I embarked on a journey that was filled with synchronous meetings and events that led to the birth of Shrouded Truth. This book recounts the surprising events before, during and after the crucifixion of Jesus that mainstream narrative does not go into, through the eyes of eight different souls, via their past-life memories. The people who participated in this book had very little, if any, connection to one another. These memories popped up spontaneously, at different points in time over a period of four years, in different parts of the world, by ordinary people who were experiencing sessions for different intents and purposes. They had varying prior knowledge of the biblical stories – some none at all, and some rather in depth. Through serendipitous and synchronous events, all their sessions were recorded, and by their good grace and permission The Magdalene lineage was produced.

Author Reena Kumarasingham is a regression therapist and certified international trainer for the Past Life Regression Academy. Her practice, Divine Aspect, has clients in Asia, Australia and Europe.