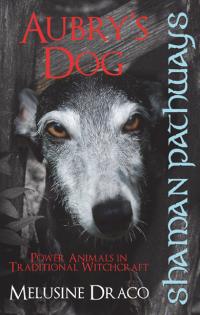 Here is an article on dogs and their magical perspective by Melusine Draco, author of Aubry’s Dog -Power Animals in Tradition Witchcraft:

Dog’s are never out of the limelight these days. They lead the visually impaired, alert the hard of hearing and support those with mental problems. The load and unload washing machines; help with medication; sniff-out substances such as explosives, illegal drugs, wildlife scat, currency, blood, and contraband electronics; they are members of the armed forces, police and the fire service. The use of dogs in search and rescue is a valuable component in wilderness tracking, natural disasters, mass casualty events, and in locating missing people. They make wonderful companions and research has shown that caring for a canine might actually extend our lifespan. Previous studies have shown that dog owners have an innate sense of comfort and increased well-being and they provide a calming influence to help reduce both physical and psychological reactivity which is particularly relevant for veterans who are suffering from PTSD … and the list goes on.

Is it surprising then, that magical practitioners can drawn on the ‘power of the dog’ ? DNA research has led to the deciphering of the genetic code of the dog, which makes the choice of the dog ideal as a ‘power animal’. An article in the Science Journal reveals that many of the 360 inherited dog diseases have human counterparts, and that the genetic code of the dog is spelt out by about 2,500 million ‘letters’, compared with the 3,000 million that describes their owners. “Dogs and humans share 650 million ‘letters’ and scientists have found an equivalent dog gene for three quarters of known human genes,” explained Dr Venture. “The fact that they are so similar, despite millions of years of evolution along separate tracks, suggests that they are important.” A fact that should not be overlooked by magical practitioners when searching for a compatible power animal.

To put power dogs in their true magical perspective we need to recognise which breeds are the aristocrats in terms of our own ancestral associations – as well as theirs. We must also understand why certain dogs are better suited to individual spell casting, protections and curses.

In Aubry’s Dog we examine the various breed characteristics that can be looked upon as further canine ‘correspondences’ for use in magical working. When using ‘dog power’, we need to be able to create an amulet, charm or talisman that will reflect these characteristics. For seeking lost property over distance, for example, we would not enlist the help of the greyhound (sight hound) – but we would use the image of a bloodhound (scent hound); for defeating our enemies we would be ill-advised to use a terrier, when we can call upon the energies of the mastiff.

When working with wild energies, however, we must refrain from attempting to give them the anthropomorphic characteristics of the domestic dog. Wild dogs are voracious and ruthless hunter-killers, sometimes turning their attentions on humans if and when circumstances warrant. As much as we may admire their fearless survival skills, it is inadvisable to underestimate them both in the wild, and in magic. When invoking the energies of the wild dog, regardless of species, we are calling upon their primeval instincts over which humans have no control.

Like the Egyptians, the early Babylonians, Assyrians and Chaldeans, who were living between the two great rivers the Euphrates and the Tigris, also revered the dog. History relates that the governor of Babylon owned so many dogs that four towns were made exempt from taxes provided the inhabitants fed their dogs properly. According to encyclopaedia Man, Myth and Magic, because the Egyptians worshipped the dog, the Hebrews hated them and scorned the belief that dogs could detect the presence of spirits and ghosts or were familiar with the world beyond the grave.

Nevertheless, in contemporary society, the animal’s value is due to its remarkable companionable abilities and because a dog’s senses are much keener than a human’s.
In Aubry’s Dog, we look at creating a protective charm for the home and a healing amulet, as well as taking the physical attributes of the various different breeds and creating a very personal, protective amulet. One of the simplest ways is to acquire a piece of jewellery, or even a metal key ring, bearing the image of one of the more popular dog breeds (or wolf, fox, etc.,) and charge it magically. For those who prefer to create an amulet from scratch in the traditional way, however, first catch your dog! Or rather acquire something from a canine that suggests strength, i.e. claws, bone, teeth, rather than the softness of fur. This does not, of course, mean that any living canine should be deprived of these accoutrements. Seeking them out over a period of time should be viewed as part of the magical quest … but your vet might be able to help out with claws or the odd tooth. A dead fox could provide everything, but as a mark of respect do bury the remains within the parameters of magical ethics.

Once we have acquired our canine ingredient (natural or manufactured) focus on the breed of our astral canine protector. It could have been selected for its:
This is a personal amulet, so only we can decide what the focus will be. Do we want a general charm that will go everywhere with us like a trusty dog; or are we looking for specific protection (in the workplace, while out hunting, or from rivals/the opposition, etc.,); or do we need backup in areas where our own faculties are not fully functioning? Do bear in mind that a focused magical spell will be much stronger than a more general purpose one.

You can view Aubry’s Dog: Power Animals in Traditional Witchcraft on Amazon. It is published by Moon Books in the  Shaman Pathways