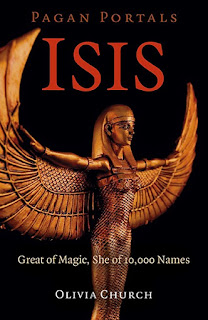 Here is a real treat - an early excerpt from the book called Pagan Portals - Isis: Great of Magic, She of 10,000 Names, by Olivia Church. The book will be published early next year, but is already available to pre-order in some places. Enjoy!

The name ‘Isis’ is one that is recognised by most people in the Western world. Without much effort, many can conjure up ideas associated with this name, whether it be images of a golden winged Goddess, the story of a God’s murder, or descriptions of ancient Egyptian temples. This is partly down to her popularity in the ancient Mediterranean, which has had an enduring influence on Western cultures to this day. Another explanation for her survival is that she is incredibly relatable and approachable to all kinds of people, from the past and the present. There is a reason why her cult extended far beyond Egypt and was still remembered during the Middle Ages, when other Pagan cults had been lost to antiquity.

The image we have of Isis is one which has been coloured heavily by ancient Graeco-Roman perceptions. The name ‘Isis’ itself is of Graeco-Roman origin. Her original Egyptian name was Aset. The Egyptian form of Aset was quite different from her latter manifestation, though she always retained her core essence.

This Goddess went through an impressive transformation and shapeshifted to such an extent that she became known as Isis of 10,000 names, identified with countless other Goddesses. In Apuleius’ Metamorphoses, better known as, ‘The Golden Ass’, Isis expresses this herself:


“I, the mother of the universe, mistress of all the elements, and first offspring of the ages; mightiest of deities, queen of the dead, and foremost of heavenly beings; my one person manifests the aspect of all gods and goddesses.”(Apuleius, Metamorphoses 11:5-6)

If Isis is a shapeshifting universal Goddess, what makes Her unique, what powers does she possess, and what is Isis a Goddess of? Firstly, Isis is a Goddess of magic par excellence. Her magic weaves its way through each of her stories, through acts of trickery, healing, regeneration, and transformation. She is also a Goddess of grief, of divine love, motherhood, protection, and sovereignty. Isis flies between life and death, and warring gods. Her empathy reaches royal families, priests, and common people, who are all united in their shared human experiences: of love gained and lost, families built and torn apart, the quest for knowledge, and the dignity of personal autonomy.