Divination for the Day: The Tower from the Vertigo Tarot 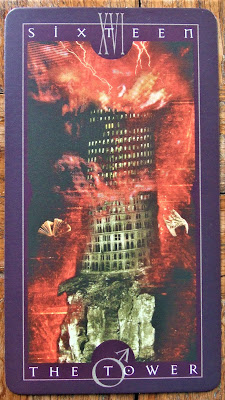 I was drawn to do a reading from the Vertigo Tarot. I turned over the Tower.

The Vertigo Tarot, based on Vertigo Comics characters, including John Constantine, Morpheus, Death, and Swamp Thing, is one I rarely use. I love it, but the cards in my first edition seem so fragile and easily scuffed that I am scared of destroying them. Of course, destruction is what the Tower is all about.

In this deck the Tower represents the Tower of Babel from the Doom Patrol comics. The book by Rachel Pollack that comes with the set says:


"The darkest card in the Tarot, the Tower usually symbolizes some painful or frightening experience that ultimately liberates us from a painful situation. Though this sounds reassuring, the experience itself can be very harsh."

I don't think anyone would doubt that we are all going through a painful time of change at the moment. I do, however, think that this card represents hope that good will come out if it in the end. The image on the Vertigo Tarot Tower card represents a story called 'The Teiresias Wars' about fictional first inhabitants of the world:


"The Teiresiae [were] magical beings who constantly changed, merging in and out of their environment and each other. But then a renegade Teiresias created something new - a fixed, that is, rigid, language, based on strict grammar and a place for everything. He and his followers began to separate the world into categories: Male and famale, Human and nature, Good and evil, Life and death. To boost their power they created the Tower of Babel, a psychic machine designed to eliminate change forever. Joining together for one last time the Teiresiae summoned a great lightning bolt to destroy the Tower. In the process, most of the Teiresiae blew apart as well. Our world today is a compromise between two extremes of total liberation and total slavery."

I think the message of that story - about the overthrow of patriarchal ideas of identity and control - is one to contemplate, but not without hope.

You can view the Vertigo Tarot on Amazon although it is out of print at the time of writing this post.

I always wondered about the god that the biblical Tower of Babel portrays. As a punishment for daring to aspire to higher things, that god split the co operative human race into a multitude of races and forms which could no longer communicate with each other.Hardly the response of a loving creator. Most of the problems we face are due to the conflicts those divides create. This version would be so much better.