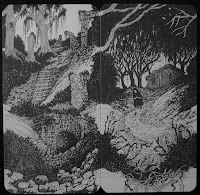 I bought The Hollow Woods because I liked the dark, Gothic artwork on the box. I enjoy games, and I enjoy storytelling, so it seemed absolutely my cauldron of witch's brew.

When I took the cards out of the box, I was just as delighted with the artwork as I thought I'd be. It consists of 20 cards showing mysterious woodlands scenes with magical creatures, spooky settings and a few images that are decidedly witchy. The cards all form a myriorama, which means they can be put next to each other in any order to create a continuous and harmonious landscape. I spent quite a while just doing that, because I loved the images on them so much.

Myrioramas were a popular entertainment and children's toy in the 19th century, and I've always found them fascinating. I also have a reproduction of a Victorian myriorama, showing various people travelling along a road beside a river, but I prefer the fairy-tale quality of The Hollow Woods. All myrioramas set my imagination going and get me thinking up stories about the connection between the people and places on the cards. What will happen next and how will encounters play out?

Despite all those good things, where The Hollow Woods falls down is its game rules. A folded leaflet in the box supposedly describes four games you can play, but in reality they are more like ways of making up stories than actual games. The first one involves laying all the cards face down, then each participant taking it in turn to reveal one and continuing a story using elements on it. The last person is supposed to come up with an ending. The next two games involve dealing out cards and players using them to construct stories. The last one adds rules that playing certain cards means other participants have to do some kind of forfeit, which might I suppose be fun as a party activity, but isn't really my kind of thing.

So, I'm only going to give The Hollow Woods two out of three overall. Lovely artwork, inspiring as a storytelling myriorama, but not great as a game. If you do want a really good storytelling card game with a fairy-tale theme, buy Once Upon a Time instead.

You can view The Hollow Woods on Amazon.