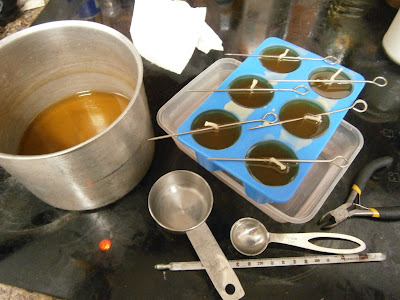 One of the easiest, loveliest and most time-honoured ritual practices is to light candles in honour of the gods, goddesses and beloved ancestors. And when the nights draw in, the light of a candle can make our homes seem that little bit more cheerful, even if it isn't part of a regular magical practice. If you have made the candles yourself, all the better.

Jane Mortimer took these pictures when she recently made a set of small candles using jelly moulds. She wrote: "I've made use of a little treasure I found in a charity shop a few days ago - a six-hole mini jelly mould. I drilled holes in each one to thread wicks through and have made my first batch of candles this morning, in my favourite honey colour, which is the nearest I can get to beeswax."

Jelly moulds are a great idea if you happen to have some you no longer want for jellies or find cheap ones like Jane did. You can also buy candle making kits. If you don't get a kit, then you will also need wicks, wax and mould sealer or putty, but you can reuse old bits of wax from the ends of other candles to prevent waste and save money. 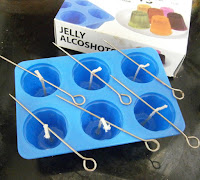 You need to make a tiny hole in the tip of the mould, just big enough to thread the wick through. Cut a piece of wick long enough to go through the hole and then wrap around a skewer or pencil across the open end to hold it in place. Put mould sealer or putty on the tiny hole to stop hot wax leaking. Place the mould in a box or other container to hold the open end upright without squashing any part of the mould.

Melt your wax in a double saucepan. You can improvise by putting a smaller saucepan into a larger one if you don't have one specifically for the purpose. I use an old egg poacher for small bits of wax and little candles. Boil water in the larger saucepan and melt the wax in the smaller one inside that. Don't leave it unattended. Stir the wax until it has melted, but don't let it overheat. 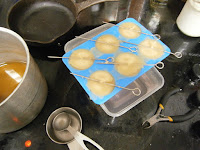 Carefully pour the wax into the moulds, then leave it to cool. It will shrink a little, so you will probably need to top the candle up after an hour or so. Prick the skin that has formed in the end and add a little more heated wax. Leave it for several hours until the candle has fully set, then put it in the fridge or even the freezer for a while so that it shrinks away from the edges of the mould.

Tap each mould a few times to release the candle, then trim the wick. You can glaze your candles by dipping them briefly in hot wax or hot water if you want to. It isn't essential, but can make them look better. 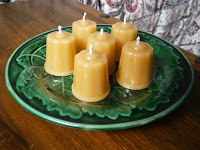 Jane added that she likes to make her own candles in a honey-colour to light from the Glastonbury Goddess Temple Flame of Avalon. That way she knows which candles are imbued with the sacred flame and which aren't. Jane wrote: "Sometimes one needs a candle that's small, but a bit taller than a tea light. I think candles this size are called bougies."

Bougie is a name for a small wax candle, although it is also a word used for a wax suppository. I usually just say votive candle. One wouldn't want to make an uncomfortable mistake :)

I hope the pictures and description of the candle-making process encourage others to get crafting. There are more ideas for magic with candles - and making candles - in my book Pagan Portals: Candle Magic.

The pictures on this post are copyright Jane Mortimer

Got to admit I've never used a double boiler - just an ordinary old saucepan. Also got to admit I've had one small fire and a couple of near misses. I put a note on the front and back doormats to remind me I'm melting wax, so I don't forget and go out, like I did once when I was hard-boiling eggs. The safest thing is to just watch it like a hawk and never walk away without taking the pan off the heat first.

Yes, the double boiler is mostly for safety and also to help it melt more evenly. I try to recommend the safest ways of doing things when I'm blogging.