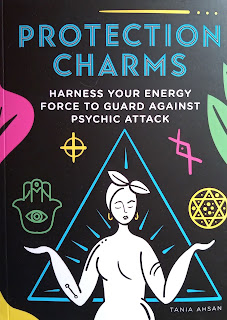 As a witch of many years, my home and person are well guarded by protection charms, including holey stones, rowan crosses, watch balls and poppets. However, those who are just dipping their toes into the world of magic need a good introduction to the basics of witchcraft. Protection spells are a great place to begin. Protection Charms, by Tania Ahsan, is a new book aimed not just at novice witches, but at anyone who feels they need extra help against negativity in every-day life.

The book's subtitle is: Harness your Energy and Force to Guard Against Psychic Attack. The description by publisher Welbeck says: "If you’ve ever got involved in a Twitter spat, been targeted by a nasty troll, or worried about walking home alone late at night, this book will give you the energetic arsenal you need to align yourself with positive outcomes and ward off negativity and danger."
Author Tania Ahsan is an eclectic witch who writes on mind-body-spirit subjects and comes from a Sufi background. For me, the most powerful part of her new book is a 49-day daily meditation practice from her family tradition, in which you align yourself with the energy of the sun, moon and planets in turn. I've not had time to try it out yet, but I'm intending to do so.
That comes in the latter half of the book. The first chapters are far more of an introductory level and explain personal energy clearing, home cleansings, ritual baths, the power of positivity, creating and using altars, the importance of being comfortable and eating well. After that it goes into details about traditional amulets and talismans from various cultures around the world, and how to create them for yourself. At the end of the book are suggestions for ways of dealing with specific problems you might face in the mundane world, from demanding bosses to online trolls.
Protection Charms is well written and visually appealing, with clear and easy-to-understand instructions. Tania covers a wide range of techniques and practices, allowing readers to try out different things and find what works for them. While it might be a bit too basic for most experienced witches, the book would be a wonderful gift for someone who is just showing an interest in learning more about magic.
You can view Protection Charms on Amazon and at publisher Welbeck's website.
Links and previous related posts:
https://www.welbeckpublishing.com/
http://www.badwitch.co.uk/2017/10/pagan-eye-gift-of-rowan-cross.html
http://www.badwitch.co.uk/2018/09/craft-restringing-my-amber-jet-necklace.html
http://www.badwitch.co.uk/2018/10/magical-dolls-poppet-of-protection-for.html
Posted by Badwitch at 08:00