A Mandala of Leaves, Flowers & Berries for January 2021 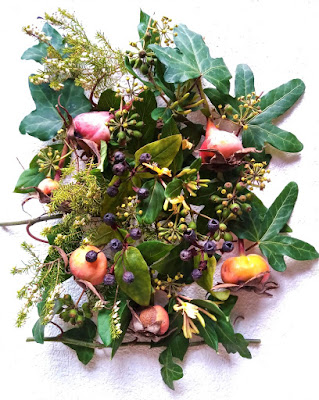 The photo shows a mandala I created yesterday from natural things I found in my garden. I've decided to repeat a project I did back in 2017. I made a mandala each month using flowers and other found objects, inspired by the book I edited, Every Day Magic - A Pagan Book of Days.

I was surprised at just how much more colour there was in my mandala for January 2021, than in the one I created in January 2017. Both were made from things I picked when I went into my garden looking for inspiration among nature to reflect my feelings for the month. Four years ago, I mainly saw dry twigs, spent seed-heads and one dying rose. This year, although there certainly were a lot of dry stalks and bare branches, I was drawn to spot the evergreen ivy, flowering heather, orange and red rosehips and even a little honeysuckle in bloom. My garden seemed to have just a little more life.

It showed me that, while we are really living in difficult times worldwide, I was in a worse place personally in January 2017. Back then, I had a very painful abscess in my mouth and was due to have two teeth removed at the dentist. This year, although I'm worried about friends who are ill, I'm also hopeful things will start to get better in general this year. I think all the seedpods and berries in my mandala reflect that.

Creating a mandala each month from things found in nature is a meditation on what is happening in the Wheel of the Year as the seasons change, but also a reflection on our own feelings and how they change. Each year has a pattern of similarities, but is never quite the same.

I'll be talking about Magic for the Month of January in a free Facebook Live event on Friday 15th January at 4pm. You can watch it after that too, as the video will remain available. Here's the link and details: https://www.facebook.com/events/885033422249566/

Email ThisBlogThis!Share to TwitterShare to FacebookShare to Pinterest
Labels: craft, mandala, wheel of the year

It's lovely, Lucya. What a great way to bring a distillation of the current season indoors and be inspired by it in warmth and comfort!

This is an absolutely gorgeous idea. Photos of it would make a great calendar...

Thank you! I'll consider a calendar :)