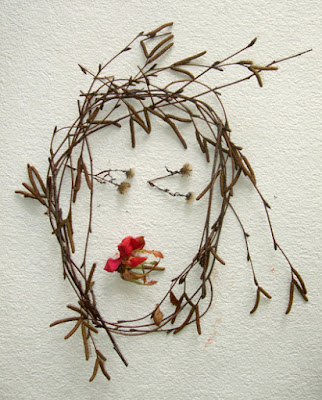 One of my resolutions for the year was to create a mandala each month including things from my own garden.

When I went outside to collect material to use the other day, I wasn't hopeful of finding anything except dead leaves and twigs. Then I noticed that my silver birch tree already had the start of catkins. In Celtic mythology, birch is the tree of renewal and new beginnings. In some new year folk traditions, bundles of birch twigs are used to symbolically drive out the old year and usher in the new. Birch is also commonly used to make besom brooms or witches' brooms, which are excellent garden implements for sweeping up dead leaves as well as for clearing sacred space when casting a circle.

The only colourful thing in my garden was a single dying red rose. I picked it. Then I picked some tassel-like spent seed heads from last year's Michaelmas daisies before going inside and laying out white paper to create my mandala.

However, I must have pricked my thumb in the garden as a few red drops immediately stained my white paper. It reminded me instantly of the various fairy tales in which someone pricks their finger in wintertime and the drops of blood on the white snow make them think of lips as red as blood. And that made sense to me too.

I am currently suffering from problems with my teeth and over the next few weeks I am due to have a series of three dental appointments, including having two teeth removed.

My first thought - after cleaning my thumb and putting on a sticking plaster - was to throw away the paper and start again. Then I decided to keep it as it was, incorporating the blood stain into my mandala. The picture above shows what I created. The ruined rose is placed over the largest spots of blood. It seemed to symbolise my fears and feelings about my mouth. The birch twigs I wove into an oval, which looked like a face with slightly wild hair. The Michaelmas daisies became eyes.

On the night of the full moon I meditated on the mandala by candlelight. It helped me come to terms with my worries and my pain. The natural objects represented both death and rebirth. Once I lose my troublesome teeth, things will get better. The catkins on the tree will open and the tree will become green again in the spring; the rose bush will have new red buds and the Michaelmas daisies will certainly flower again in late summer.

I was not intending to keep any of my mandalas - only the photographs I take of them - but this time I am going to fold up the flowers and twigs in the paper and tie it in red wool, which is traditionally a folk remedy for toothache. Only when my tooth problems are over will I bury it in my garden to put the past behind me.