Magic for the Day: Groundhog Day in Old & New Folklore 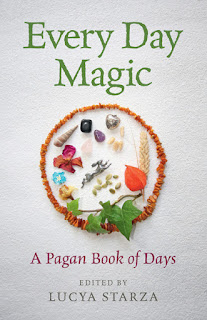 Today, February 2, is Groundhog Day, which is mostly celebrated in the USA. In England I suspect it is best known because of the movie of that name, in which characters are stuck reliving the same day again and again until they sort out their problems and can move on. Many people have been saying that life in lockdown is a bit like that.
However, I genuinely believe we only have to keep going a bit longer before life starts to return to some semblance of normal. The lesson we can take from the movie is to spend this time trying to make our own small place in the world a little better in some way.
To give a bit more background to Groundhog Day in folklore and tradition, here's a quote from Every Day Magic - A Pagan Book of Days from the entry for February 2 by Hearth Moon Rising.

Groundhog Day: This is an example of a Euro-Pagan holiday that was adapted to American soil. It probably originated in pre-Christian rites to the Bear Goddess, echoes of which survived in a folklore that the bear would wake from hibernation on the Christian holiday of Candlemas and predict the length of the remaining winter, based on her shadow. German settlers to Pennsylvania transferred this belief to the groundhog. According to Delaware Indian legends, the early animals went underground to escape the Great Flood. The groundhog was the first to re-emerge. For this reason it is regarded as a grandparent. Drum to summon the groundhog, then cheer and clap in appreciation.

Every Day Magic is a community book of spells, rituals, meditations, craft projects, festivals and other things to enjoy each day of the year. You can view Every Day Magic on Amazon. It is published by Moon Books.