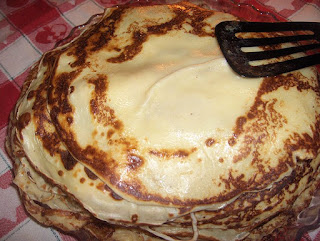 If you want to have plenty of money in the year ahead, you should make sure you eat plenty of pancakes on Shrove Tuesday. That's a bit of folklore related in Are You Superstitious? by Lore Cowan. The book  actually goes further than that and says that it is unlucky not to have pancakes in the house on the day.

Shrove Tuesday is a Christian tradition dating back to Medieval times in England. It was the day on which people were expected to go to church to be shriven before the start of Lent. However, people were given a half day's holiday in which to do that, so naturally it also became a time for lots of other fun and games - including football matches in the streets and fields - as well as going to church.

Pancakes have been a traditional food eaten on Shrove Tuesday for hundreds of years. Eggs, fat and dairy products were supposed to be avoided during Lent, so it became customary to eat them up during the days before, including making them into pancakes.

Another piece of old folklore is that if you happen to have chickens and a cockerel, you should throw one of your pancakes to the cock. If he eats it all himself, then bad luck will come to your home. If he shares it with the hens, it is a sign of good fortune.

I realise some pagans try to avoid any Christian festivals, so might not be making pancakes today. Personally, I'm happy to celebrate customs simply because they are the traditions of my country. And I do enjoy pancakes.

You can find out more about festivals in February in my video talk on Magic for the Month.