I took these photos of painted rocks in a park last summer. I'd been intending to blog about them, but I held off because I know many pagans are extremely opposed to leaving anything artificial when out and about. "Leave only footprints, take only memories," is a phrase often repeated.

When it comes to sacred sites, or places of unspoilt natural beauty or archaeological interest, I totally agree. At wells and springs, there is a real problem with people leaving plastic offerings or nylon fabric clouties. They don't biodegrade and are not in keeping with the ancient traditions of most of these places. Volunteers have to remove them to stop them damaging trees through their weight and constricting bindings. 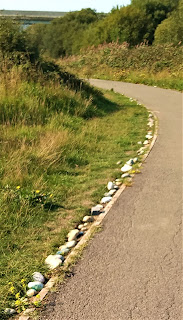 However, I'll admit I'm a bit of a fan of street art in cities. I've blogged about that many times in the past, including this environmentally minded wall painting. I also don't have a problem about people attaching things to railings where it is permitted by the owners, or putting whatever art or offerings they like in their own gardens, so long as it won't harm wildlife.

So, what about these painted rocks?  They are at the edge of a Tarmac path in a public park, which is semi-urban. The park is a wetland habitat for birds and plants, but it is also a much-loved community asset. During lockdown, it is where many local residents would go for their daily walks. These rocks started appearing at that time. I suspect they were partly a way for people to communicate with others when they weren't allowed to meet up for face-to-face gatherings. They were also a way for people to express their love of the NHS, wishes for everyone to stay safe, and some remembrances of loved ones who had passed, as well as presumably a craft to occupy kids stuck at home.

The park itself is somewhere I like to visit when I'm allowed to travel for weekends away, but it isn't near my home so I haven't been there for a while. Now regulations have eased, I'm planning a trip to that area soon, and I will go for a walk in the park. I wonder whether the painted rocks will still be there. Maybe there will be more of them, or maybe someone will have removed them, thinking they are litter. 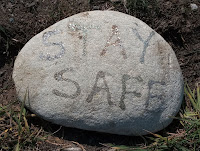 Personally, I like them, I am going to admit. I do hope anyone who paints anything outdoors uses non-toxic paint and avoids glitter, which is very bad for the environment, but apart from that I can't see these stones are doing any more damage than the Tarmac path itself or the council's painted signs that dot the park.

But what do you think? Is this form of urban art a dangerous hazard, an act of vandalism, a eyesore, or a crafting project that brings joy to many and harms none?  Do leave a comment.

The photos are all copyright Lucya Starza.

I like it. In Kent there's a country park where people hide painted stones, and if you find one, you can log it on the facebook page and re-hide it. In Glastonbury there's lots of street art, and when the council put down large boulders to stop people parking caravans, the boulders were soon painted with colourful stars, rainbows, etc. Acrylic paint is the best to use, as it weathers well, and is non-toxic.
Jackie

Typically, I leave offerings and tokens and ritual arrangements alone in parks and green spacesand along trails. But I do remove ritual litter when it may be dangerous to wildlife, pets, or folks (chicken bones, for instance). I've not come across painted stones around here (Cascadia, USA), but I suspect that if they become a popular item to leave, they'll rapidly become a nuisance.

I don't paint rocks but I do use a lot of ultra fine mica based glitter to paint with. Mica comes from the earth so it won't hurt anything. Was buying the fancy art shop stuff but found that the cheap loose eye shadow tubs are exactly the same thing.