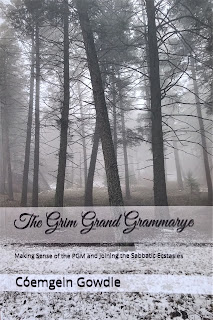 Grimoires of magic are hundreds of years old, many containing spells and incantations from ancient times. Traditional practitioners that use them often swear that the rites and ceremonies within them are more powerful than the magic of modern pagan witches. Whether that's true or not, I don't know, but I've just read a book by a man who  believes it is. The Grim Grand Grammarye by Cóemgein Gowdie is an attempt to make this form of traditional magic easy to understand, and easy to practice, by 21st century witches.
The subtitle of the book is 'Making Sense of the PGM and Joining the Sabbatic Ecstasies'. PGM stands for Papyri Graecae Magicae, or Greek Magical Papyri. Originally, these were written mostly in ancient Greek, although there have been many translations. Cóemgein Gowdie writes that after beginning his journey into the Craft with Wicca, he soon became fascinated with traditional witchcraft and delved into its origins by studying ancient texts.
What he discovered was that there are correlations between magical practices and religions which on the surface seem quite different, even opposed. Deities of monotheistic faiths have origins in paganism, and there are many similarities between gods and goddesses of different pantheons. For this reason, Cóemgein believes grimoire magic is accessible to, and useable by, people of all faiths, including Wiccans, even if the wording in old books calls on Jesus, the saints, Pagan gods, or even names like Lucifer.

The first half of  The Grim Grand Grammarye covers theology, history and theory. The second half is practical magic. This is the description of the book from its back cover:

"This book is a labor of love for the world of Traditional Witchcraft. Philosophically, the Bible and the Western corpus descended to us today from the Mediterranean is discussed at length, allowing room for growth and liberation from our accepted canon to occur. Relying heavily on the Papyri Graecae Magicae, the Book of Oberon, the Grimoirium Verum and Solomonic materials, it explains clearly how:

"Everything you need to work sorcerously with plant people and true spirits from beginning to end is presented clearly and entirely idiot-proofed."

While I'm not personally intending to brew up a poisonous potion or summon a Chthonic entity at a crossroads, I found this book fascinating from an information point of view. I'm very much of the opinion that witches should know how traditional magic and witchcraft worked, even if their own practices are very modern.

You can view The Grim Grand Grammarye on Amazon.

Oh dear. Just followed the link to this book at Amazon and they don't know when or if it's coming back into stock. It's not on Abe either :(

It's working again! Amazon has had a lot of weird technical issues with my book... I got off the phone with a rep today who said it has been a stock issue with Covid-19. Sorry! It is available!