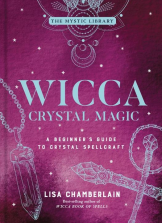 This month, Sterling Ethos is publishing two magical guides from Wiccan author Lisa Chamberlain. They are aimed at anyone who wants to learn how to use these gifts of the Earth for spells, elixirs, and charms. Last week I published a short extract from Wicca Herbal Magic. Here is an extract from Wicca Crystal Magic.

Many sources, including this guide, often use the terms crystal and stone interchangeably. This is because the technical differences between the two in terms of their physical makeup aren’t really significant when it comes to magic. The more appropriate term in any case is mineral, as it covers crystals as well as most other types of stones used in crystal magic. (There are a couple exceptions, which will be discussed below.) In other words, not all minerals are crystals, but all crystals are minerals. While it’s not necessary to understand the technical distinctions between crystals and other minerals to work successful magic with them, it’s useful to have a sense of what distinguishes them from rocks.

Minerals are defined as any inorganic substance that is formed naturally through the Earth’s underground geological processes, which involve the interaction of heat, pressure, and fluid. Every mineral occurs in a solid state at normal Earth temperatures and has a specific, consistent chemical composition. Of the thousands of known minerals, metals like gold, silver, and copper are perhaps the most commonly recognized, but several others are also of interest to humans. Minerals occur in a very wide variety of shapes and colors and may be found as a standalone specimen or in a mixture with other minerals.

Most of the stones involved in magic and healing are composed of single minerals, such as hematite, malachite, and turquoise. There are some exceptions, however, including lapis lazuli (Latin for “blue stone”), which is a mixture of the minerals lazurite, diopside, and others. There are also a few substances that are often referred to as minerals or stones and are made of organic matter. Jet is fossilized wood, for example, while amber is the fossilized resin of trees. Crystals are minerals with a specific atomic structure that forms a regular pattern, which creates the points, flat surfaces, and other interesting geometric forms we tend to think of when we hear the word crystal. Snowflakes are a good example of something with a crystalline structure and has six arms or sides growing symmetrically from a single droplet of water. Probably the most common type of crystal that people are familiar with is quartz crystal, which is used in watches, clocks, and many other electronic devices. True “crystal balls” are made from the clearest varieties of quartz. Other forms, especially rose quartz and amethyst, are also very common and are useful for a wide variety of magical and healing purposes.

Rocks are solid pieces of the Earth that may contain two or more minerals, along with organic matter such as coal or shale. Unlike crystals and pure minerals, rocks don’t have a consistent composition. Usually, the mineral content of a rock comes in the form of microscopic grains rather than large chunks. However, one exception is the geode—a hollow rock lined on the inside with crystals. These form when water leaves mineral deposits inside the cavity within the rock, which slowly grow into crystals, often with stunning results. Geodes can contain single or multiple minerals. The most common types are lined with quartz, amethyst, agate, and sometimes combinations of all three.

Depending on the context, the word stone can be essentially interchangeable with rock, but the latter word tends to bring to mind drabber, less distinctive objects. For example, lapis lazuli, since it’s comprised of two minerals, technically qualifies as a rock, but you’ll rarely hear it labeled as such. Stone is often the preferred term when the item in question is of interest for use by people, such as for building, making art, or working magic. Some Witches will affectionately and jokingly refer to their personal crystals as their “rock collection,” but by and large the preference for a catch-all term in this department is stone. In the general context of magic, stone can refer to a crystal, a mineral, a geode, or even a simple pebble from a bubbling stream.

Finally, some sources will use the term gemstones to refer to both crystals and certain other minerals. Meaning "precious stone" or "jewel," this term is not rooted in science or magic but is instead a category of particularly attractive and often rare minerals used in jewelry. Some minerals used in healing and magic, such as garnet and fluorite, are considered gemstones, though there isn’t universal agreement on what exactly qualifies as a gem. At any rate, the word gemstone was used widely by healers and magical practitioners during the Middle Ages and is used in some sources on Witchcraft and magic today.

Great article! I appreciate you on writing great content about crystal magic. Keep sharing such kind of great information with your readers. Thanks!