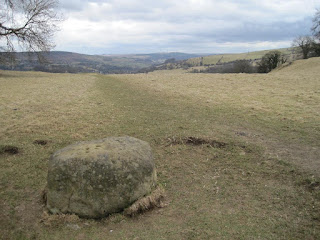 Plague Sunday is an annual event that takes place on the last Sunday in August. It's nothing to do with the current pandemic, but remembers the inhabitants of the village of Eyam, in Derbyshire, who bravely isolated to prevent the spread of Great Plague in 1665. The village's fame today - and it's tourist industry - is due to it being known as the Plague Village.

Bubonic plague arrived in Eyam in 1665 with a flea-infested package of cloth sent from London to the local tailor, Alexander Hadfield. His assistant, who opened the bundle, took ill and died, and many other villagers started to become ill. The local rector, Reverend William Mompesson, and a Puritan minister, Thomas Stanley, instigated measures for infection control. These included moving church services outdoors and other social distancing rules. Eventually the entire village decided to quarantine themselves to prevent further spread. Traders from outside would leave goods on marked rocks; the villagers then left the payment coins in holes in the rocks filled with vinegar, to disinfect them. Although many residents succumbed to the terrible disease, the quarantine worked as the neigbouring villages remained plague-free.

Eyam has celebrated Plague Sunday since 1866, to remember the brave efforts of the villagers. It was originally held in mid-August, but was moved to the last Sunday in August to coincide with Wakes Week. This week was, in medieval times, a celebration of local saints, but in later centuries became the time when mills and factories shut down, giving workers a bit of a summer holiday. The last weekend in August is also a bank holiday weekend in England.

Steve Roud, in The English Year, makes an additional comment that people often think the nursery rhyme 'Ring a Ring o' Roses' is about the Great Plague, but there's no evidence to back this up. The first printed example of the children's rhyme is from America in 1888. He writes: "...it is the best known example of the way modern groundless suppositions about traditional rhymes and customs are invented and take hold - indeed, becoming folklore themselves."

Picture credit (Smb1001): The Boundary Stone, Eyam, Derbyshire, with holes believed to be where coins were place for trade during the quarantine of the Bubonic Plague outbreak of 1665-6.

Email ThisBlogThis!Share to TwitterShare to FacebookShare to Pinterest
Labels: folklore

I remember reading about the heroic efforts of Eyam village. However, I didn't realise there was an annual event to mark their isolation. Thanks for sharing this Lucya.