Craft: Skull Candles Made With Moulds from Europacrafts 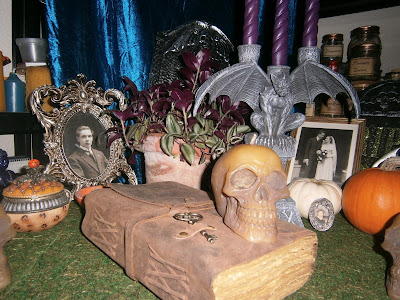 Isn't the skull candle on Jane Mortimer's ancestor altar just amazing? She made it herself, and sent me the photo and background story. Here's what she wrote: 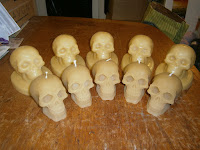 I recently saw a batch of candle moulds on eBay that included some skulls. I wondered if the seller was Colin Parker, the wonderful mould maker who's been making moulds since the 1970s - remember the resin chess sets that were popular then? He made those moulds. I messaged him via eBay to see if it was Colin, and he phoned out of the blue. What a surprise! The last time we spoke on the phone must've been at least 12 years ago.

He now sells moulds through Europacrafts. He sent me some and I've made five skull candles, and finished three of them, using a paint from the Warhammer shop called Technical Typhus Corrosion (where DO they get their names?!). One of them's going in the raffle at my local moote, and one will be gifted to the chap in the Warhammer shop because he thought the first unpainted candle was so cool. The rest will adorn my newly rearranged ancestors' altar (pictured at the top). 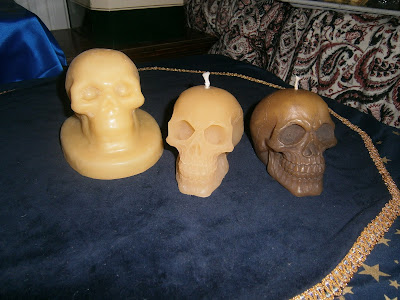 Andy in the Warhammer shop was bowled over by his aged-up skull. He's named it Stanley and he talks to it when it's quiet in the shop, since he's the only member of staff there. Oh well, at least he no longer has to talk to himself!

I'm not surprised he's impressed. I'm going to buy myself a mould!