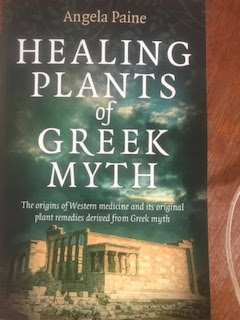 Here is an extract from The Healing Plants of Greek Myth by medicinal plant chemist Angela Paine.
The original goddess religion of ancient Greece
In ancient times the area in the southern Mediterranean which we now recognise as Greece was a paradise of beautiful forested islands, rivers running down from mountain peaks, where animals large and small roamed and seas teamed with fish. No wonder this was one of the first places in Europe where humans chose to live, attracted by the rich vegetation and wonderful climate, feasting on the abundant fruit, meat and fish. They cleared little plots of land for crops and pasture, built houses and boats and used the plants around them as food and medicine. The ancient tribal hunter gatherers lived in small settlements, making little impact on their environment and worshipping many goddesses. The archeo-mythologist, Marija Gimbutas, spent years tracing the goddess culture of ancient, neolithic Europe, including Greece, through photos and drawings of statues, carvings and decorative motifs on a multitude of different objects. Through these she was able to trace a matrilineal order of inheritance in the area. Inextricably intertwined with this goddess worship was a profound reverence for every aspect of the natural environment: the trees, flowers, herbs, animals, birds and fishes, as well as the rivers, streams and pools, the mountains and the sea. Many of the symbols Gimbutas discovered were abstract, representing a complex system of interlocking elements and people, suggesting that the ancients were aware of the interconnectedness of all life. She found goddess figures in tombs, temples, frescoes, reliefs, sculptures, figurines and paintings. The earth goddess was the universal fruitful source of all things and goddess religion lasted for a very long time, much longer than the male-dominated religions that came after, with the invasion of the Helenes.
Ancient goddesses were represented as naked, demonstrating the powerful and dangerous sexuality of the divine female. The Mistress of the Animals, a naked goddess, was a common theme throughout the Eastern Mediterranean region and Mesopotamia, and she was later imported to Greece. Nanno Marinatos, in “the goddess and the warrior,” suggests that the Mistress of the Animals transformed into many Greek characters: Medusa, the adversary and patroness of men; Artemis, patron of elite warriors in early Greek religion and Circe. Medusa was the initiator of young men, subjecting them to a violent initiation under the tutelage of Artemis, alter ego of the Gorgon/Mistress of the Animals. Circe, who features a combination of sexual appeal and danger, means ‘she-hawk’ in Greek and like the Mistress of the Animals, she was a hunter and both predatory and protective. She transformed her visitors into wolves and lions and kept them living tamely around her palace. In 600 BCE the Mistress of the Animals appeared in Crete as Potnia Theron, an Artemis-like goddess. This motif, which appeared in the Bronze Age, may indicate an earlier version of Artemis in the Mycenean era. It reappears in the 7th century BCE in central Greece, winged, un-winged and semi-winged.
You can view The Healing Plants of Greek Myth on Amazon. It is published by Moon Books.