Pagan Eye: A Black Cat Statuette As Every Witch Needs 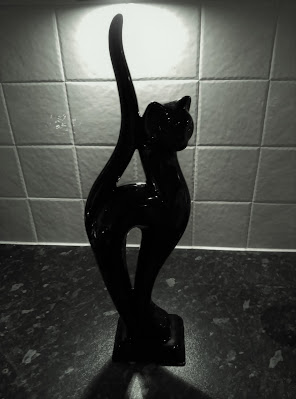 Here's a photo of a black cat statuette I was given because, according to the friend who gave it to me, every witch has to have a black cat. When I was doing a talk on witchcraft earlier this week to a lovely Women's Institute group, I was asked if I had a black cat. The question reminded me of my ornament and I thought it would be timely to post a pic here.
I do have real cats but my feline companion, Tommy, is a cheeky black-and-white. I did adopt a stray black cat a few years ago, but sadly the old boy died not long after he came to live with me.
Actually the association of witches with black cats is relatively recent. According to Professor Marion Gibson, Professor of Renaissance and Magical Literatures at the University of Exeter and the author of several academic books on witchcraft, black cats only became essential for witches in Victorian times.  Before that their cats could be any colour. For example, in the 16th century, Elizabeth Francis, from Essex, was thought to send her white spotted cat Satan to do magical mischief on neighbours she didn't like. She was accused of witchcraft. You can find more examples here.
Whatever the truth behind the association of witches with black cats, I like my ornament.