Pagan Eye: Plaque to Those Accused of Witchcraft 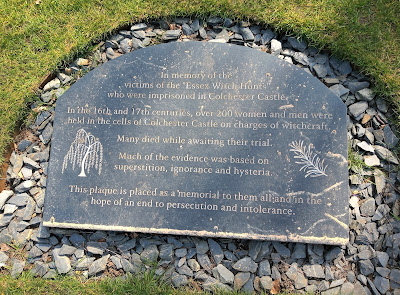 I visited Colchester Castle at the weekend, as I was in the area when I went to the Leaping Hare pagan festival. I took this photo of a plaque that remembers the victims of historic witch hunts in Essex. It's in the grounds outside the building. The plaque reads:

"In the 16th and 17th centuries, over 200 women and men were held in the cells of Colchester Castle on charges of witchcraft. Many died while awaiting their trial. Much of the evidence was based on superstition, ignorance and hysteria. This plaque is placed as a memorial to them all and in the hope of an end to persecution and intolerance."

Inside the castle you can visit the dungeon area in which there are replicas of cells in which people accused of witchcraft might be imprisoned. It's an uncomfortable place, but an important part of the history of witchcraft and witch accusations in England.
Colchester Castle also houses a museum where you can see items from Bronze Age, Iron Age, Roman and Norman times. One of the displays shows a reconstruction of what is known as the "doctor's grave", found in Stanway, Essex. The individual was buried around 40–60 CE, near the time of the Roman Conquest. It includes surgical instruments, but other finds in the grave suggest the individual buried there might have been an ancient druid. The person is sometimes called "The Druid of Colchester".
On each Pagan Eye post, I show a photo that I find interesting, with a few words about it - a seasonal image, a pagan site, an event, or just a pretty picture. If you want to send me a photo for a Pagan Eye post, please email it to badwitch1234@gmail.com Let me know what the photo shows and whether you want your name mentioned or not. For copyright reasons, the photo must be one you have taken yourself and you must confirm that you are submitting it for A Bad Witch's Blog.
Links and previous related posts
http://www.badwitch.co.uk/2014/10/pagan-eye-witches-wicked-bodies.html
http://www.badwitch.co.uk/2014/10/review-penguin-book-of-witches.html
http://www.badwitch.co.uk/2021/10/blackpool-tower-dungeon-calls-for.html
http://www.badwitch.co.uk/2022/03/a-great-day-of-talks-and-shopping-at.html
Posted by Badwitch at 08:00