Excerpt from Naming the God: Gods of London 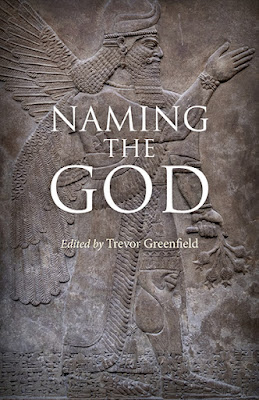 Naming the God is a new title from Moon Books and I'm proud to have contributed a chapter on the Gods of London. I've been blogging a lot about Goddesses recently, being involved with the Femine Power exhibition and events at the British Museum, so it's good to redress the balance and write about Gods for a change. Here's a short extract from Naming the God, from my own chapter:

Gods of London
by Lucya Starza

London still honours its old, Pagan gods. Underneath twenty-first century offices lies the temple of an ancient mystery cult.  Leaving the busy, city streets, you walk through its doors and down steps, through layers of earth revealing the secret signs of centuries past, and enter the ancient Temple of Mithras. The sights and sounds of worship greet you.

Torches on pillars dimly light the chamber, which is lined by benches for you and your brothers in the cult to sit. You can hear them chanting, as the mysteries are enacted at the altar at the far end. This is only a reconstruction of Mithraic worship in historic times, shown through sound, and light, and haze. Back in Roman times, as a woman, I would not have been allowed into this exclusively male space of worship, honouring a god depicted slaughtering a bull and banqueting, with images of the sun, the moon and the zodiac in scenes carved on the walls.

The Temple of Mithras was rediscovered in 1954, but it was originally built on the bank of the river Walbrook in the midthird century, when London – or Londinium – was a Roman city. Mithras, a god associated with the sun, justice, contracts and warfare, was originally a Persian deity, but his cult was spread across the empire by Roman soldiers, to whom his mysteries appealed.

Archaeologists found that the London Mithraeum was later rededicated to Bacchus, the god of wine, in the early fourth century, who was worshipped by both men and women. Lead weights depicting maenads – frenzied female followers of the god of wine and ecstasy – have been found nearby, along with other depictions of Bacchus. Statues of other deities have also found at the Walbrook site, including a head of Serapis, Egyptian god of the underworld; a statue of the Mercury, god of commerce, the head and shoulders of a river god – perhaps representing Neptune or the Thames, and other statuettes of deities, both Roman and Romano-Celtic. One that is currently in the Museum of London, along with many of the statues from the Temple of Mithras, might even represent the spirit of London itself. The Walbrook was, without doubt, a religious centre for those who visited, lived and traded in Londinium.

The Roman Temple of Mithras reopened in 2017 by communication corporation Bloomberg. Although it is not a place where modern Pagans can worship, it offers a hint of what it was like when Romans did, through a sound and light performance that repeats at regular intervals throughout the day. The temple is seven metres below the streets of modern London. A mezzanine, directly above, introduces it with interactive displays that invite visitors to explore the practices and symbols associated with the cult of Mithras. At street level is an exhibition of more than 600 Roman artefacts found during excavations as Bloomberg’s offices were built. You can visit the London Mithraeum, at 12 Walbrook, London EC4N, free of charge, although advance booking is recommended.

You can view Naming the God on Amazon and see it on publisher Moon Books' website.