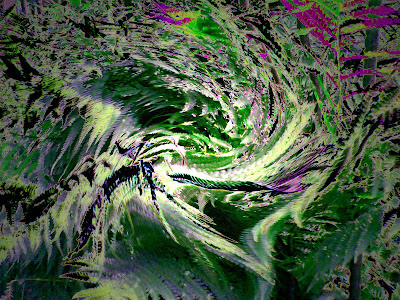 The relationship between drugs and religion is a complicated one - so complicated that I haven't really written about it on A Bad Witch's Blog apart from a brief mention in a posting about edible mushrooms last autumn.

I've been reticent to talk about drugs for a variety of reasons - the most important being that many drugs are illegal and/or dangerous and I certainly don't want anyone ending up in prison or hospital because of anything I've said.

But drug-inspired insights seem to be looming in my life at the moment, so perhaps it is time to dispense with reticence.

By that, I don't mean I've been taking drugs personally. I haven't. In fact, I've been as sober and straight as a judge in recent weeks because I've felt I needed to be capable of driving to hospital at any hour of the day or night after my partner suffered a slipped disc.

No, it is my partner who has been high as a kite - on prescription painkillers given to him in A&E. And, under the effects of those painkillers, he says he has had some strange and insightful dreams involving going on a journey to meet himself.

I am very pleased to say my partner is now a lot better. He not only managed to return to work this week and is in less pain, but he also says his dreams have helped him recognise a personal issue that was holding him back. Double points for the drugs!

Another reason for my reticence in writing about drug-induced visions as being of genuine spiritual significance is that, most of the time, what you see when you've take psychedelic substances is simply illusion or delusion. It can seem very real at the time, but that's just the way the drugs work.

I do admit I have tried drugs. Back in my mis-spent youth I took magic mushrooms at Glastonbury music festival and then on a holiday in Amsterdam. In my defence, I would point out that they weren't so illegal back then.

Under their effect I saw the sky above Glastonbury turn to coloured fractals. This resolved into images of the God and Goddess, who embraced over the Pyramid Stage and shone their love onto the crowd as rays of golden sunlight...

And in Amsterdam, in my hotel room, I saw the Goddess Barbie

step out of the television set (which was definitely turned off at the time). She told me she was initiating me as her priestess and that I ought to wear more pink...

Yes... well... If I *really* believed any of that happened I probably need counselling...

Nevertheless, many people who are experienced in shamanic techniques do believe one can gain genuine spiritual experiences from the use of certain drugs. I certainly wouldn't feel confident writing about this myself - but I know a man who does.

I've just been sent a review copy of psychologist Ross Heaven's new book The Hummingbird's Journey to God: Perspectives on San Pedro - the Cactus of Vision

on the ceremonial and therapeutic uses of the hallucinogenic plant San Pedro. I am very much looking forward to reading it and, as soon as I finish, I will review it on A Bad Witch's Blog.

The picture at the top shows the same group of ferns I photographed for my post on midsummer magic, but psychedelicised with Photoshop.

LOL at the "Barbie" part...Nice article..And yeah drugs can be useful and at the same time risky.

Some herbs are very useful in producing these hallucinations that people use for meditation and trance states, like Salvia Divinorum (Diviner's Sage), Kava Kava, and Mugwort.