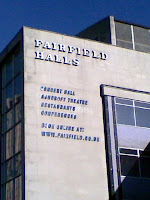 Witchfest International turned out to be more exciting than I expected.


I'd certainly been looking forward to last Saturday's pagan festival run by Children of Artemis at Croydon's Fairfield Halls. Last year's event had been great, and so had Witchfest South earlier this year. But this year, I found myself a little bit more in spotlight than I had anticipated.


Witchfest always has a good line-up of speakers. Melissa Harrington, who last year spoke about Aleister Crowley, began the day talking about Lilith, the biblical first wife of Adam who refused to submit to him and fled to the desert. Sometimes seen as a demon who preys on men, she can also be viewed as a champion of downtrodden women and of battered wives.


After that I was torn between going to a lecture by Cassandra Eason, who I always enjoy hearing, and listening to a talk called Tantra and Chakras Intro and Misconceptions by 30-year practitioner of tantra, Kumar. I chose tantra, because I hadn't heard Kumar speak before.


Kumar said tantra is part of yoga, and kundalini is the Hindu term for the dynamic principle of goddess energy. He explained that tantra has gained sexual associations because the ecstasy that can be experienced through tantra can feel orgasmic. However, it is a difficult spiritual path requiring lots of hard work and can be dangerous unless you have a proper teacher. For those who want to find out more about tantra, Kumar pointed to free online information on Kundalini Yoga by Sri Swami Sivananda Saraswati.


From one magical practice that comes with a health warning, I went to straight to another - Enochian Magic. This was the third in a series of lectures and workshops run by Rufus Harrington at Witchfest. It recapped on material from the previous events and built on them, ending with an Enochian ritual that, although short, was extremely powerful.

Enochian has a reputation as being magic that can send you mad. Although I don't think I'm quite mad yet, I did feel so buzzy afterwards that instead of going to a talk on the history of masks, by James Bennett, that I had planned on attending, I ended up going to the mead bar and chatting excitedly with friends. I so lost track of the time that I even missed the start of Professor Ronald Hutton's lecture on The Wheel of the Year, which I had really been looking forward to.


But perhaps being in the bar for a long time was a good thing in some ways because while I was there I got invited to take part in the day's closing ritual.


The people who had been scheduled to do the closing ritual had had to leave early for family reasons and asked an old friend to step into the breach. I happened to be in the bar when he was rounding up volunteers to help.


A little while later I found myself in a backstage rehearsal room with a bunch of witches I knew but had never worked with as a group before, helping devise a ritual with only an hour to go before we went on stage.

I haven't been on a stage since I was young and never in front of an auditorium as large as that at Fairfield Halls. Although I only had a very minor role, I was seriously suffering from stage fright.


Afterwards, it was back to the mead bar for another much-needed drink, then off to watch far more professional people perform. The Witchfest evening line-up of music included Damh the Bard, The Dolmen and Inkubbus Sukkubus followed by dancing until 1am.

A great day - but one that definitely pushed me out of my comfort zone.

Thanks for your hydroponics garden news blog. I enjoy it very much. Were a usa and worldwide provider and we loved your article, so well put it on our blogs associated with out site http://www.hydroponicswholesale.com

Hydroponic gardens? I think you are mistaking my blog for someone else's!

Witchfest was as enjoyable and informative as ever, thanks for your account of the day.

is there some heathen witchfest coming up?

Witchfest 2011 was a couple of weeks ago. There were talks on heathenism at Witchfest - as well as talks on most pagan spiritual paths.

Anybody going to witchfest in Croydon this weekend?