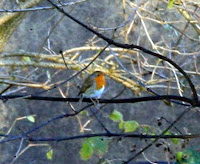 One December 25 morning, several years ago, I looked out of my window and saw a chirpy little robin with a bright red breast sitting on the low wall of a garden over the road. How perfect!, I thought.

Then, as I watched, a large tabby cat crept out from the cover of a nearby bush, pounced - and little Cock Robin was no more.

I guess it only shows that life is no greeting card and cats have no sentimentality over Christmas.

Who Killed Cock Robin is a traditional nursery rhyme that was first published around 1744 - it is a murder story, though at first glance hardly a murder mystery as the first verse gives away the killer's identity - not a cat, but a sparrow:

Nevertheless, mystery surrounds who the Sparrow, the Robin and all the other birds and creatures in the rhyme represent.

There is evidence that the poem might date back far further than a few hundred years. Owl would have rhymed with shovel much better in Middle English, for example. A version of the story is found in Germany and some folklorists think that the rhyme might be about the mythological murder of the Norse god Balder, who was shot with an arrow made of mistletoe.

Others have suggested it might be about the ritual pagan sacrifice of a king while a theory based less on mythology is that it was written about William Rufus, who died of an arrow wound in the New Forest in 1100. Others have said Cock Robin might be Robin Hood.

According to superstition, it is extremely unlucky to kill a robin. If you do, your hands will shake forever after. If you steal a robin's eggs, then something of your own will then be stolen. The Encyclopaedia of Superstitions - A History of Superstition

by M Radford says that if a robin taps at the window of a person who is ill, they will soon die.

However, seeing a robin is usually thought to be good luck. If you see one on New Year's Day or the first day of spring, make a wish and it will come true. If you see a robin on Valentine's Day, it means you could be in for a bit of romance with a sailor.

According to ornithomancy you should observe where the bird is sitting to predict the weather. If a robin is perched on top of a tree or building, the weather will be fine. If he is sheltered in branches, it will rain or snow.

These days, robins are a symbol of the festive season. Like many modern Christmas traditions, this is said to have started in the Victorian era. Postmen at the time wore red uniforms and were called robin redbreasts, so people associated getting Christmas cards with robins.

However, robins are such a lovely sight in midwinter - with their red breasts, puffed up feathers to keep out the cold and chirpy singing to attract a mate and declare their territory - that I would be very much surprised if our ancient ancestors didn't welcome the cheery robin on a cold and frosty morning just as much as we do.

This year, a robin has made his home in my back garden. You can see him the photo (above left). I do love seeing him there, especially over Yuletide, and I wish him more luck than his predecessor.

Thanks for the interesting words and links and your photos are great. Gotta love that macro. I have taken some really interesting photos in the dark with one little tiny colored light and a glass object. Fun stuff. Poor "cock robin", I am glad you honor your robins. Wishing you the best of the best in 2010.

Emme - thanks for your lovely comment! Your pictures with a coloured light and a glass object sound fascinating.