Forget-me-nots and crocks of gold 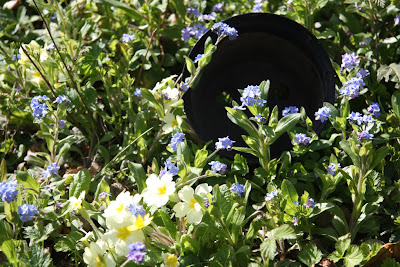 My flowerbeds are always full of forget-me-nots at this time of year. The diminutive, delicate-looking blue flowers mean "true love" according to The Language of Flowers

Another book, The Meaning of Flowers: Folklore, Fairylore, Superstitions, Remedies

by Cecily Mary Barker, gives a sadder meaning. In an Austrian folk story, two lovers were walking beside the Danube. The girl pointed to some blue flowers being swept along in the fast-flowing river, and wished she could have them. In the name of true love, the boy jumped in to get them for his sweet heart, but treacherous currents dragged him down. He threw the sprig of blooms to his beloved, shouting "Forget me not!" just before he disappeared below the water and was drowned.

The book also says that forget-me-nots are fairy flowers and can be used to help find fairy treasure.

I don't think it can mean fairies plant forget-me-nots as a memory aid to mark the spot they have buried a hoard of gold, because the flowers grow just about everywhere. If that was the case, either fairies have huge amounts of buried treasure or else they also plant lots of forget-me-nots as decoys, which would rather defeat the object!

The photograph above shows forget-me-nots growing among my primroses - another flower associated with finding fairy treasure. Both are sometimes called "key flowers".

Seeing them growing together, I naturally had a good look for any signs of treasure, but all I dug up was an old flower pot - which could mean someone had been there before me or perhaps I am being blinded by fairy magic and only seeing an empty pot when really it was a crock of gold.

John Fiske, in his book Myths and Myth-makers: Old Tales and Superstitions Interpreted by Comparative Mythology,

suggests that wearing a spring of forget-me-nots in your hat can help you see past such illusions.

It tells the tale of a man travelling alone on a mountain who picks a blue flower to wear on his hat. He instantly sees an iron door in the mountainside, which was not apparent before. It opens to a lighted passage, leading to a magnificent hall heaped with gems.

The traveller fills his pockets, then greedily also fills his hat, not noticing as he turns it upside down that the flower has fallen from the band. As he leaves, the little flower calls: “Forget me not!” He looks around at the sound, but does not notice the tiny blue petals among the glittering jewels, so leaves without it. But, without the magical flower, he becomes hopelessly lost, doomed to wandering the lonely mountains with nothing to guide his way.

If you fail to find fairy gold with flower magic, you might at least get a new frock. According to a book called Kentucky Superstitions,

if you swallow the first forget-me-not of the season, you will get a new dress of the same colour.

Links
http://www.badwitch.co.uk/2009/02/primroses-for-love-protection-and-fairy.html
The Language of Flowers

Stunning picture of the flowers, will definitely make my day. Keep posting.