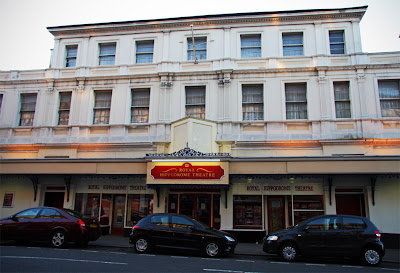 Last Saturday night I did something I’ve wanted to do for ages – I went ghost hunting.

I’ve certainly visited haunted places before. As a young writer for a local newspaper, I once spent the night in a haunted manor house - all alone except for a creepy old caretaker who wandered about, scaring me witless from time to time with his sudden appearances at doors and windows - but that wasn’t a proper ghost hunt.

Back then, I didn’t have any ghost-hunting equipment, conduct any séances or make any efforts to communicate with spirits. I just sat in the great hall by its enormous fireplace, watching the lengthening shadows and listening to the old building’s creaking timbers and listening to the wind howling outside. To be honest, I was jolly glad I didn’t see a ghost.

Last Saturday, however, I did it for real.

It all came about because I was looking for something fun to do while I was having a short holiday in Sussex. Browsing a local what’s on website, I saw an all-night ghost hunt advertised that was taking place at a Victorian theatre – The Royal Hippodrome, on Eastbourne’s Seaside Road.

Some might think me strange for visiting the Sunshine Coast on possibly the hottest weekend of the year and then choosing to spend the night in a spooky old theatre. But, for me, this beat sunbathing and building sandcastles.

The ghost hunt was being organised by The London Paranormal Society, which normally runs ghost walks and ghost hunting events in London. Eastbourne’s Hippodrome might have been a new location for the group, but they certainly seem to know their stuff when it comes to hunting ghosts.

The evening started with an illustrated talk about the history of the Hippodrome – built in 1883 as a music hall – and a bit about some of the characters said to haunt it. These include a former manager who lived there, and his daughter.

More intriguing was the ominous-sounding Tod Slaughter – an early 20th century British actor in the mould of Béla Lugosi - who revelled in playing fiends and villains to such an extent that his love of scaring people is said to continue after his death.

Ian, our chief guide for the evening from The London Paranormal Society, also spent some time explaining a bit about different types of ghosts – from those who remain earth-bound for a reason to those who are simply echoes of past events – and talking about what we would be doing to try to find them.

Then we separated into three small groups to conduct vigils in different parts of the theatre. The group I was in started in the former manager's now-derelict flat, in the attic right at the top of the building. We had high-tech sound recording equipment, ultra-sensitive microphones, digital thermometers and night vision cameras, but we also used the old-fashioned techniques of using our psychic abilities to try to sense the presence of any ghosts.

Almost at once, I felt tingling up my spine and the air around me become noticeably cooler – something also recorded by the thermometers. Several of us thought we sensed the presence of a spirit who could have been the theatre manager. The air seemed heavy with sadness and feelings of loss.

The second vigil took place in the auditorium, where we used a Ouija Board

to contact any ghosts who might want to communicate with us – as well as using some weird electronic gizmo that apparently scanned for unspoken words. Don’t ask me how that worked, but it somehow came up with “Telephone... get”. Perhaps it was ET trying to phone home, but no one’s mobile phone rang and on the whole the second vigil seemed less convincing than the first.

Nevertheless, I was thoroughly enjoying the evening. The organisers were great and my fellow participants were a really nice bunch. Many of them had previously been along to other London Paranormal Society ghost hunts, which gave the whole event a friendly, club-like atmosphere.

It was during the third vigil, however, that things changed.

We were attempting a séance behind the stage. We sat in a circle, holding hands. It was pitch black. It was also cold, but then it got much colder. I felt what seemed like icy fingers touching my arm. No one was outside our circle, yet one of us suddenly lurched forwards, shouting that they had been pushed. The circle broke, there was confusion. I admit I screamed.

What it was I don’t know. But if Tod Slaughter’s ghost does still prowl the wings of the stage where he once awed crowds, I bet he was laughing.

We left the theatre just as dawn was breaking and the sun was beginning to rise over the sea. Our night-long vigil ended.

I couldn’t say categorically that any of the bumps, clanks or footsteps we heard, or the strange moving shadows or flickering lights we glimpsed in of the corners of our vision – or even the inexplicable feelings of cold, spectral fingers on our skin - were definitely ghosts, but then again they might have been.

Photos (top to bottom): The Royal Hippodrome in Eastbourne, waiting for the event to start in the stalls, the supposedly haunted derelict attic room, a spooky sloping corridor, Mr Bones - a leftover prop was the theatre's skeleton staff on the night we visited, view from the circle. All photos taken by The Bad Witch. 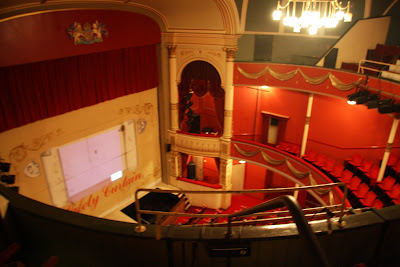