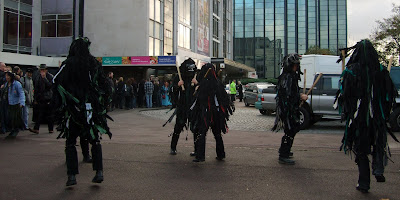 It has been a year of big changes for Paganism, with witches and druids in the spotlight as never before. Some of this attention has been good - such as druidry being recognised as a religion by the Charity Commission - and some of it has been bad - including some rather horrid reports by newspapers The Daily Mail and the Telegraph.

Witchfest International, the annual pagan festival run by Children of Artemis - an organisation dedicated to providing accurate information on Wicca and witchcraft - has often been more in the public eye than some other pagan conventions.

For a start, Witchfest is held in a large venue - Fairfield Halls in the centre of Croydon. It is also widely promoted via leaflets and on the internet. It might not be quite so famous as the summer solstice at Stonehenge, but it is a pagan event that mainstream media companies know about and want to cover.

However, CoA has always been very particular about what journalists it allows in to Witchfest. The pagan organisation certainly wants to attract beneficial publicity, but works hard to ensure no one likely to write a scurrilous diatribe against witches gets through the doors.

This means that those who attend Witchfest to learn more about the craft, meet fellow witches and generally have a good time can do so without fear of their face appearing on the front cover of a tabloid the next day alongside some nasty hack piece.

However, the right kind of reporters have always been made welcome and this year a BBC crew was there filming a documentary about three young witches on their spiritual journey.

And Witchfest really is the best pagan event for any young witch just starting out on their path. The programme is packed with talks and workshops suitable for those of all levels of experience - from those who simply want to find out if paganism is right for them, to high priests and high priestesses who have been running covens for decades.

One good example of this was the talk by Rufus Harrington on Magical Orders Past, Present and Future. He covered important movements including The Golden Dawn, the OTO and Wicca, but also described a new magical order he is setting up - The Temple of the Phoenix.

The Temple of the Phoenix will primarily be an online magical community offering training that is compatible with witchcraft, but which also teaches some of the ceremonial magic practised by such groups as The Golden Dawn. The Temple of the Phoenix will also run workshops in London and the north of England and will offer those with the right experience and commitment specialist training in such things as Enochian magic. The website is due to go live next year.

The only problem I ever have with Witchfest is that the programme is so packed with good things it is pretty much impossible to attend everything I want to see. Here are just a few examples of the day's wonderful talks and workshops: Witchcraft Balancing the Light and Dark by Melissa Harrington; Guide Channeling by Moonswift and Gavan; Shamanism and the Eightfold Path of Wicca by James Bennett; Psychic Self Defence by Tylluan Penry; a Children’s Magical Workshop by Tracy Rolfe; a Meet the Witches Q&A Panel with Tam, Kate West, Martin Wyse, Damh the Bard and Tylluan Penry; The Making of The Stone - a new mystical feature film - by Layla Randle-Conde; Physical Psychometry by Inbaal; Fairies by Professor Ronald Hutton; Hexes and Curses the Way Forward by Kate West; Ogham and Druidic Tree Magic by Damh the Bard; and Elemental and Fairie Magic by Laura Daligan.

Other entertainment during the day included Spirit of Albion, a pagan play by Egotrip/Archway Theatre, and Border Morris displays by Wild Hunt Morris (pictured above entertaining the queue at the start of the day).

Wicca is all about balance, and Witchfest manages to get the work and play balance right by offering wonderful evening entertainment to match the daytime lectures. This year's offerings of music and song lasted into the early hours and included: rap rock with Nylon Sky; acoustic pagan folk from Damh the Bard; melodic punk rock from Kitty Hudson; high energy folk rock with The Dolmen; and witchy goth rock from Inkubbus Sukkubus. The Witching Hour Rock Club offered a chance to dance until midnight.

Over the next week or so I'm going to write more about some of the subjects covered in Witchfest talks - there just isn't enough space to go into each talk in depth in a single review of an event.

You can find out more about Children of Artemis and future CoA events at http://www.witchcraft.org/

Looks like I really missed out this year, having decided not to attend due to what I felt was the general decline of the event. I went last year to be greeted by a half filled sellers hall and people in a general malaise. If COA have stepped up their game - I might have to ensure I come back next year. Can't wait to hear about the talks you attended.

Well, some of the traders did say people still seemed to be very careful with their money - but what do you expect in a recession? I thought the quality of the talks was very good.