Spooks and spectres at Michelham Priory 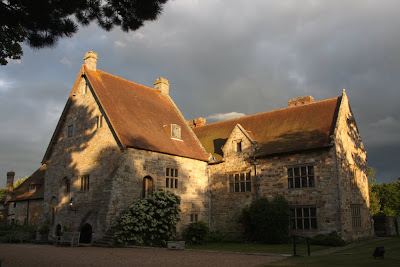 When you go on an organised ghost walk, you don’t really expect to see any ghosts. Even at Michelham Priory, which has the reputation of being the most haunted house in Sussex, actual reported sightings of ghosts are few and far between. Yet, just a couple of nights ago, my partner saw one - or at least saw something that had him very spooked.

We decided to go on the official Michelham Priory ghost walk organised by Sussex Darkside because it seemed like an entertaining thing to do while we were having a break over the bank holiday. Michelham Priory - a beautiful house on a moated island that was originally built in 1229 as a religious establishment - is a lovely place to visit, but we had never been there at night and were interested to learn more about its turbulent past and troubled spirits.

And it is said to be haunted by a veritable host of the restless dead. According to Rupert Matthew’s book Ghost Hunter Walks in Sussex,

Michelham Priory’s ghosts include a grey lady, a man and woman in Tudor clothing, a young girl in a ragged dress and an angry man who, it is said, has tried to force previous ghost hunters out of the building by scaring them witless.

The Sussex Darkside tour, which lasted a good couple of hours, went into more details about these and the many other ghosts of Michelham Priory - including some ghosts from modern times. A woman in 1940s clothing is sometimes seen in an old nursery, staring out the window, perhaps waiting for some man who never returned from the war. I didn’t see her myself, but I did feel a sense of oppression in the room.

It was in the kitchen that my partner thought he might actually have seen a ghost. The kitchen is large and very old, with flagstone floors and a cauldron hanging in the huge open fireplace. It would have been part of the priory’s original refectory. Our tour guide was telling us about the ghost of a cook who haunts the room, sometimes giving people a glimpse of her legs as she hitches up her long skirts when standing near the fire to stir the pots.

But my partner didn’t see that. He was at the back of the group, and he happened to glance into an alcove behind a large wooden dresser. Standing there was a black-robed figure.

At first, my partner thought it was one of the ghost walk team, lurking in the shadows in a costume, ready to jump out and give us a surprise, so he said nothing. But the figure remained there immobile and we left the room.

My partner mentioned it when the walk was over. He asked our guide and the other team members who the person was and why they were standing behind the dresser - but none of them knew anything about it. It wasn’t any of them, they assured us. We all went back to have a look, but the figure had gone.

It could have been a ghost. If it wasn’t, then it is hard to explain exactly who or what my partner saw. Perhaps it was simply caused by an overactive imagination, seeing spooks in the shadows when nothing was really there. But my partner is normally quite a sensible person - I’d even call him a natural sceptic. I think there is a good chance he did see something strange and unexplained.

For more details about ghost walks, you can visit the Sussex Darkside website at http://www.sussexdarkside.co.uk/ or call 07956 307684. For information about Michelham Priory and other events there, visit http://www.sussexpast.co.uk/property/site.php?site_id=15

You do realize he will be mercilessly teased about this now...

I believe in ghosts, although I'm not sure they are earth-bound spirits, so I won't tease. In fact, I'm jealous - I've never seen a ghost. Have a look at this - it talks about a hooded monk in the undercroft which seems to match the sighting: http://www.darkencounters.co.uk/michelham-priory/casebook-michelham-priory.html

Chilledchimp - thanks very much for that link!