Of castles, ghosts and a lady in red 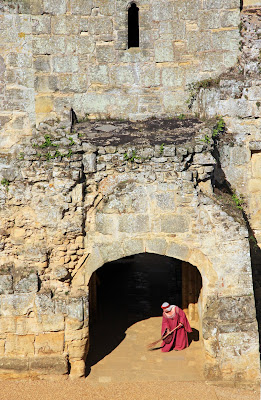 Castles are among the most impressive historic monuments one can visit - and they vie with temples, cathedrals and ancient stone circles for being the most symbolic places built by man.

While I was out and about making the most of the glorious autumn equinox weather last week, I visited Bodiam Castle, in East Sussex.

Bodiam Castle is considered to be one of the loveliest castles in the area.

It was built in 1385 as a defensive structure, but also as a fashionable and comfortable home. Although it is now partly in ruins, the exterior is still almost complete and enough of the interior survives to make exploring its towers and turrets exciting.

I went there with my partner on a hot, sunny day. The sky was blue and the castle looked glorious, framed by greenery and with its white ramparts reflected in the dark waters of the moat.

Yet I couldn't help feeling that the castle, however beautiful it might appear, had an uneasy atmosphere. I mentioned it to my partner - who is normally quite skeptical - and he said he also felt there was something unquiet about Bodiam, its deep moat and wooded grounds.

So I did a bit of research.

Like most castles, Bodiam has its ghosts. The most famous, I discovered, is the Red Lady. She has been seen standing on the top of a tower, usually at night under a full moon. Those who have seen her say she seems to be waiting for someone or some thing. She seems to gaze out over the moonlit countryside, her eyes fixed upon some distant point. What or who she seeks, no one knows.

I must admit that after finding out about the Red Lady, I got a bit of a shock when I looked back over the photos I had taken at Bodiam and found I had, indeed, photographed a lady in red. However, I suspect the woman with the crimson gown and besom broom in the picture above is not an apparition, but a costumed guide employed by the National Trust, which owns Bodiam Castle.

According to Haunted Castles of Britain and Ireland,

by Richard Jones and John Mason, other ghosts that haunt the castle include a little boy in Victorian clothes who is sometimes seen running across the bridge, only to vanish half way across as though he had fallen into the moat and, presumably, drowned.

The book also states: "Some people passing the ruins at dead of night have reported the distinctive sound of spectral revels emanating from the hollow shell. Others have told of hearing 'strange oaths' and 'foreign-sounding songs'."

But, of course, I was at Bodiam during the day rather than at night and my unease was not necessarily connected to any supernatural experience - it could have been something to do with my own feelings about the history of the area. Sussex is where the Normans under William the Conqueror defeated the English King Harold at the Battle of Hastings on 14 October 1066. Although Bodiam was built several centuries after the Norman Conquest, I do tend to see all Norman-style castles as symbols of a time when the English were a conquered and oppressed people.

And castles are very powerful symbols, which can mean different things depending on how they are depicted. The castle in the story The Royal Surveyor

by Kafka is a place of strange foreboding; in Edgar Allan Poe's gothic tale The Fall of the House of Usher,

Castles can certainly be symbols of evil and tyranny, but they can also be symbols of safety and all that is good - especially if you are living inside one when threatening forces are without.

They can be the fantastical dwellings of fairy-tale princesses, where knights quest to win their hand from all that would oppose them; they can represent justice, honour and chivalry - the seat of the Round Table and the Knights of King Arthur; they can be every Englishman's home.

Or they can simply be the ruins of bygone times, that might still hold secrets and treasures for us to find.

Perhaps that was why I felt uneasy. Perhaps Bodiam castle still holds a secret - something the Red Lady is trying to show us, or that fell to the bottom of the moat with the body of a little boy who lost his footing a century ago.

Perhaps, one day, someone will seek out those hidden secrets and lay the ghosts of Bodiam Castle to rest.

The standard price for an adult is £5.80. However, the people at the ticket office will automatically charge you the gift aid price of £6.40 unless you specifically ask for a standard price ticket. Other concessions are also available. If you do not pay tax in the UK, or are on a low income, make sure you ask for the ticket you want. 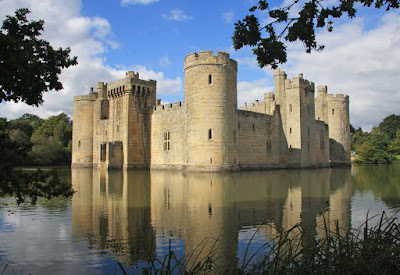